1st episode of GAME OF THRONES now available on DVD

The full Season 1 DVD and Blu-Ray box sets for Game of Thrones don't arrive until the start of March, but both Canadian and British viewers can get a sneak preview as of today. 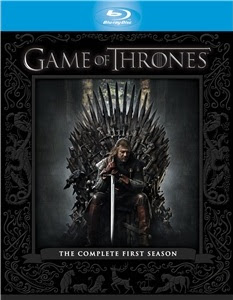 The first episode, Winter is Coming, has been released on DVD by itself. In the UK, it's available at branches of HMV for either £1.99, or free with any HBO box set over £10. In Canada, it's been spotted at branches of Future Shop. I'd be surprised if a chain wasn't doing a similar deal in the States.

In the UK, Game of Thrones airs on the cable channel Sky Atlantic which the overwhelming majority of the British population does not have access to, so this marks the first time that the general population has access to an episode of Thrones. So that's a lot of people who are going to get to the end of the episode and go "Argh!" when they find they have to wait another two months for the full box set :-)
Posted by Adam Whitehead at 20:40

"so this marks the first time that the general population has access to an episode of Thrones."

I was thinking of more that this would be the first time the general population will have even heard of the show ;)

I heard supermarket conversations, heard from friends that want nothing to do with fantasy etc; the huge publicity GRRM got on the end of the year lists (Time USA Today..) only will add to that...