Tanzania, 2161. The matriarch of the Akinya family, Eunice, a famous pioneer of space travel and exploration, has died at the age of 130. The family convenes for the funeral, but grandson Geoffrey would prefer to be carrying on his research into elephant cognition. When an anomaly is discovered amongst Eunice's possessions, Geoffrey is asked to investigate, the beginning of a journey that will take him from Earth to the Moon to Mars...and further still. 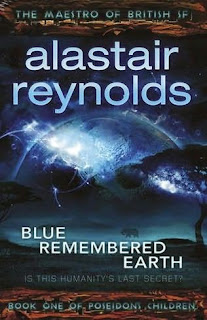 Alastair Reynolds's new novel is the first in a new sequence, Poseidon's Children, which will span 11,000 years of human history. As such, the three books in the sequence will presumably be stand-alones, divided by immense gulfs in history, but with added context given to the reader by reading all three in order. Reynolds and his publisher have backed away from the 'trilogy' moniker (and the 'Book One of Poseidon's Children' tagline present on some early drafts of the cover has been removed) to de-emphasise the idea this is a serialised story that people will have to wait years to be concluded.
Reynolds is noted for having a somewhat grim vision of the future in his previous books, so Blue Remembered Earth is notable for its more optimistic tone. The human race has become richer and more technologically advanced than ever before, with Africa now driving the world economy and formerly war-torn, poverty-stricken states are now prosperous and driven. The price of this new era of peace and development is the Surveilled World, a state of near-total coverage of the planet by AIs which intervene if any crimes are detected. As a result almost no crimes or murders have been committed in decades (although Reynolds, a noted fan of crime thrillers, can't help dropping one puzzling and apparently impossible murder in as a subplot). This near-total surveillance state is not so prevalent on other planets and moons, however, due to time-lag issues.

The book is essentially a treasure hunt, with Geoffrey and his sister Sunday following the trail of clues left behind by their grandmother which ultimately leads to the Big Reveal. The trail, and the resulting plot, are somewhat convoluted and, it has to be said, unconvincing. Nevertheless, the story is entertaining with a constant stream of inventive ideas: an area on Mars controlled by rogue machines; an AI simulacrum of Eunice who provides advice and becomes more and more like the real Eunice as they uncover more information; attempts to help improve the quality of life for zoo elephants by merging them holographically with a real herd in the African wilderness; and a system-wide telescope being used to scan for signs of life on other worlds. The characters, particularly Geoffrey and Sunday (our main POV characters) are well-developed as we learn their respective reasons for turning against the family's strict business-oriented hierarchy, but even their antagonistic siblings (who initially appear to be villainous) are fleshed-out satisfyingly by the end of the book.

As the most low-tech of Reynolds's books to date, Blue Remembered Earth is perhaps his most conservative in terms of ideas and scale and scope. This isn't a bad thing and he seems to enjoy working under greater technological constraints than previously, but occasionally he seems to chafe against the restrictions (the robots on Mars and the large-scale mining of the Oort Cloud both seem somewhat more advanced than the tech elsewhere). He also doesn't fully explore the freedom implications of having a state of total surveillance, other than in a cursory surface manner.

Still, Blue Remembered Earth (****) is highly readable, brimming with ideas and refreshingly optimistic. Recommended. The novel is available now in the UK and on 5 June 2012 in the USA.
Posted by Adam Whitehead at 21:05

I do understand that this has a far more restricted scope than his Inhibitor novels, and I guess the brakes on his technological speculations are a part of that.

Came here to read the first review, so thanks for that! I'm (as always) looking forward to the latest Reynolds book. He is my favorite Spec Fic author.