Niko Bellic is a veteran of war and ethnic strife in the Balkans. Tiring of a life of violence and brutality, he receives an invitation to move to Liberty City, where his brother Roman reports he has made a new life for himself involving fast cars and beautiful women. Moving to the States, Niko finds his brother's stories were exaggerated. He runs a cab firm and is in debt up to his eyeballs with various shady characters. Proving his usefulness in eliminating opponents, Niko finds various factions in Liberty City vying to employ his talents and his new life in a new country becomes even more violent than the one he left behind. 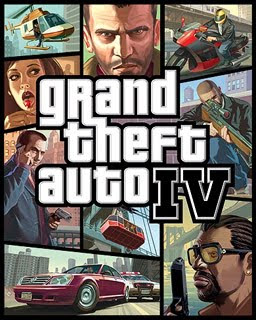 Grand Theft Auto IV was released in 2008 and at the time of its release was reportedly the biggest-budgeted game of all time (a record later lost to The Old Republic) and the fastest-selling (since outstripped by Modern Warfare 2 and 3). Despite the title, it was the sixth 'main' game in the Grand Theft Auto series and the first in the series to appear on current-generation hardware, featuring massive advances in graphics over the previous games in the series. It was greeted with near-unanimous critical acclaim but fan reaction was more mixed, with criticisms over the toning down of the wackiness of the series and the reduction in game size and character customisation from the colossal San Andreas.

In general terms, the game plays in an identical manner to Grand Theft Auto III, Vice City and San Andreas. Your character has the freedom to pick from one of several missions from one of several characters at a time, or can go off and do odd jobs for money or can simply chill out and explore the city. Given the leap to the next generation of hardware, it's surprising how similar the gameplay is to the previous titles in series. Of course, graphically the game is a massive leap forwards in quality and players will likely spend early parts of the game simply gawping at the sun rising over the ocean, or the monumental size of the city and its dozens of skyscrapers when seen from a helicopter. On PC, adding a graphics mod (like the mighty IceEnhancer mod, if your PC can handle it without instantly exploding) can make the game even look semi-photorealistic and absolutely jaw-dropping. Liberty City's fidelity to the real New York City is also startling: one of my NYC-based friends reported even finding his apartment building in the game, let alone faithful renditions of the Empire State Building, Statue of Liberty, MetLife Building, Grand Central Station and the Chrysler Building. 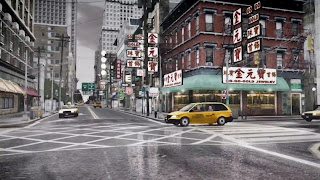 GTA4 with the IceEnhancer mod. If your PC has a modern graphics card and is cooled by liquid nitrogen, your game can look like this.
A noticeable addition to the game is a cellphone, through which your character can receive missions and call up contacts. The cellphone (which also doubles as a camera and MP3 player) is a handy addition to the gameplay and provides the game with its biggest single step forwards over previous titles in the series: the ability to interact with other characters. In previous games, you could only interact with characters in missions and cut-scenes, and had no say over how your relationship with these people developed. In GTA4, you can ring up contacts and arrange to meet them outside of missions for drinks or going to shows or playing games. This improves your relationship with these characters, and at a certain point you can call on them for resources or favours. Additional depths to these characters are also revealed in conversations that take place during these meetings. The game essentially gives you some control over how interpersonal relationships develop during the story, which is fairly remarkable for a non-RPG.

Unfortunately, a potentially paradigm-shifting mechanic bogs down into a minor annoyance when, whilst clinging to the roof of a truckfull of heroin with the driver trying to shake you off to your imminent death, you get a phone call from a friend asking you to play darts with him. When you say no because you are about to die in the face, they get the huff and your reputation points with the character go down. By the late-game period, when you have more than half a dozen friends and contacts, the calls and texts begging for you to hang out with them become a constant stream of annoyance, and this results in them being ignored by most players. Fortunately they are purely optional.

The meat of the game, then, is the plot and the missions, and both are well-executed. The storyline is excellent, probably the best in the entire series, and is depicted through convincing writing and strong voice acting. Niko's character development is great, as he tries to be a good person but all too easily is dragged back to a life of violence and crime. This is Rockstar's latest attempt to present a three-dimensional protagonist who is realistic and complex but must also be capable of committing whatever mayhem the player wants him to and is their best attempt yet (Vercetti in Vice City being an unredeemable villain and CJ in San Andreas being too nice, conflicting frequently with the player's lunatic actions). Other characters are also excellently developed, with Niko's brother Roman and Jamaican friend Jacob being notable. For a game with an ethnically diverse cast (the game has lots of satirical commentary on American immigration issues), however, it is disappointing that the game's only gay character of note being presented as a mincing, effeminate cliche, although his role as Niko's conscience in several missions is important. 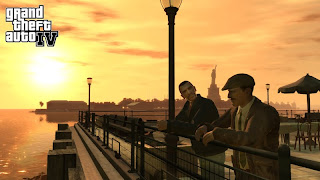 A rare quiet moment in the game, with the insane ultraviolent mayhem on hold.
The missions are great, ranging from assassinations to massive all-out battles to car chases to helicopter duels amongst the skyscrapers of the city. Towards the end of the game (the single-player missions will take about 25 hours to complete) things start getting a tad repetitive, but generally speaking the missions are varied and fun. Combat has been given a big overhaul, with the addition of cover mechanics. However, enemy AI appears to almost be unchanged from previous games in the series, with them being worse shots than Imperial Stormtroopers, and rarely challenging. Car handling has also been made more realistic, with the cars being heavier and more difficult to stop (aside from the best sports cars). This makes the choice of which car to take on a mission far more important than previously. The game's handling of police pursuits has also been made more realistic, with it being possible to escape the police's attention by getting out of a search zone and lying low. However, it's also much easier than before, and the police are much less of a threat than in previous games.

Where the game succeeds is in its depiction of a modern city riven by competing interests (corporate, government and criminal) and its portrayal of Niko as a bewildered individual caught in the middle of it all. The game is a lot of fun, if not quite as insane as the previous instalments of the series, with occasionally effective musings on the nature of violence and its eroding effect on the soul. The game is also heavily satirical, passing commentary on the USA and the issues it faces on many levels (the war on terror, corporate power, the economy, immigration, civil rights) through dialogue and also the game's numerous, entertaining radio stations (and yes, Lazlow returns to Liberty City with a new show).

Overall, Grand Theft Auto IV (****½) is an impressive, engrossing game. It lacks the tonal variety that the different cities and cultures of San Andreas brought to proceedings, but it has more depth of character and a stronger plot than any previous GTA game. It's also a tragedy, a rather startling choice for Rockstar and a genuine risk for them to take with one of the biggest gaming franchises in the world. Artistically, it pays off handsomely. The game is available in a collected package with its two spin-off episodes, The Lost and the Damned and The Ballard of Gay Tony, on PC (UK, USA), X-Box 360 (UK, USA) and PlayStation 3 (UK, USA).
Posted by Adam Whitehead at 13:45

Nice review.
Unfortunately, for me, I couldn't get passed the constant annoyance of the cell phone in this game. The calls you could ignore were fine. The ones you couldn't, when Nico would automatically answer, killed the whole game for me.

They really should do a swindon mod for this.

I think this video is the best review I have ever seen for a video game. I really didn't enjoy GTA IV though.

There is only a small error : Roman is cousin of Niko, not his brother.

Um by faithful rendition of the Statue of Liberty, do you mean this?

I dunno. She seems a bit... too happy. Or just too caffeinated, seeing as she's holding a cup of coffee instead of a torch.
Great review though. I loved the game. I think the most impressive thing about playing the game is the way they were able to capture the vibe of a city. They graphics weren't AMAZING at the time, but it really feels like a mini NY which makes the cinematic aspect fantastic.