Sterling Archer is a suave, skilled secret agent with excellent combat skills and a knack for meeting beautiful women. He's also an arrogant and spoiled man-child with terrible interpersonal skills and an overbearing, controlling mother, who is also his boss. Along with his co-workers, Archer is put into situations where he has to use his wits to survive...which is often a big problem. 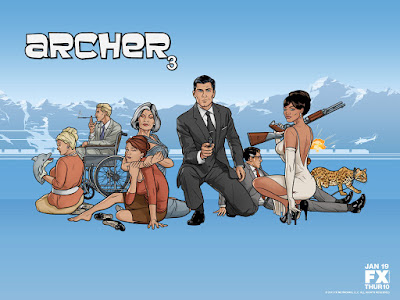 Archer is an animated comedy drama which riffs on spy movies, action thrillers and the Cold War. It's a bit like James Bond, if M was James Bond's mother and everyone was incompetent. Its setting is ambiguous (the Soviet Union and KGB still exist and cars look like they're from the 1970s, but everyone has a mobile phone and internet access) but that's not really important. What is important are the central cast of characters and the increasingly bizarre situations they get into.

Some viewers bounce hard off the show because of Archer himself, a misogynistic and arrogant bully who has no respect for anyone and tends to disparage everyone around him, unless they're a woman he's trying to seduce. He refuses to read full mission dossiers (preferring to skim them for the gist), a fact that nearly gets him and others killed on several occasions. Archer is, of course, supposed to be initially unlikable and in some respects even repugnant. Creator Adam Reed based on the character on the original depiction of James Bond as seen in the novels, where he is far more amoral, cold-hearted and self-centred a character as presented on screen. As the show continues, however, Archer shows both increased depth and character development. He is far more intelligent than he presents himself as and over the course of the series grows friendships with the rest of the character which appear genuine. He is also a massive Lord of the Rings fan (the books, as the films don't seem to exist in this universe yet), dropping frequent Tolkien references, and is also a grammar perfectionist, insisting on the correct use of "literally" and "whom" even in the midst of firefights. Voice actor H. Jon Benjamin plays Archer brilliantly, with excellent comic timing.

The only character in the show who appears to be both sympathetic and relatable is Lana Kane, played by Aisha Tyler. Lana is an expert in hand-to-hand combat and has formidable firearms skills. Initially she has a slightly more abrasive personality but over time she evolves into the conscience of the team. She is also extremely attractive (she and Archer have an on-off relationship through a lot of the series) but is noted as having unusually large hands, which is mentioned frequently. Lana's exasperation when Archer does something monumentally stupid (usually at least twice an episode) can be seen as a stand-in for the audience's reaction. Far less sympathetic is Malory (Jessica Walter), Archer's borderline-alcoholic and controlling mother, and the source of his various neuroses and personality problems. Malory is thoroughly dislikable but later episodes show her background as a secret agent during the height of the Cold War which at least hints at why she is the way she is. In later seasons, when she is no longer in charge of events as much as she was before, she becomes a bit more of an interesting character.

The secondary cast is amusing but a bit more variable in its treatment. Cyril Figgis (Chris Parnell) is initially presented as a sympathetic figure, a geek who has somehow ended up in a relationship with Lana and despises Archer. However, he is quickly revealed to have his own massive personality problems and issues. He gets some good character development in the first three or so seasons, but then becomes less of a prominent figure later on. Pam (Amber Nash) is the relaxed head of HR for the office and evolves over the course of the series into a force of nature, an occasional cocaine addict and drinker who is also a good listener and becomes, improbably, Archer's best friend. She is also a drift racer, a member of a fight club and has a tendency to "Hulk out" and go on the rampage at inopportune moments. She is many viewer's favourite character. Cheryl (Judy Greer) is much more of a random character, Miss Moneypenny if she was a secret millionaire with an incontinent pet ocelot (whom Archer inexplicably dotes on). And yes, that's a Salvador Dali reference (one of Archer's less obscure references). Cheryl provides much of the offbeat and surreal humour of the show, but her random bouts of insanity mean she doesn't have much of a character herself. Ray (creator Adam Reed himself) is a background character, a gay and more flamboyant secondary agent who picks up Archer's slack, who evolves into a more prominent character later on. Rounding out the regular cast is Krieger (Lucky Yates), a mad scientist who provides most of the team's gadgets and weapons but also has his own, dubious experiments going on.

The show does have several over-arcing storylines which span the first four seasons. In these seasons Archer and the team form a private security and spy firm called ISIS (a name which is abandoned in later seasons for obvious reasons). They have an ongoing rivalry with another firm, ODIN, and are also engaged in ongoing battles with the KGB, complicated by Malory's secret affair with the head of that organisation. Archer is also trying to find his father and reignite his relationship with Lana. Episodes in these seasons revolve around fairly obvious James Bond and Cold War spoofs. At the end of Season 4, the agency is shut down by the CIA and the team decide to become criminals and sell a vast quantity of cocaine they've come into possession of. This results in the offbeat fifth season, subtitled Archer Vice, in which all other long-running storylines are (in some cases mercifully) abandoned and the show focuses on a much more tightly serialised narrative. This experiment is successful, but the sixth season reverts to more episodic storytelling with the agents now working for the CIA directly. It ends with arguably the funniest storyline to date, a riff on Fantastic Voyage with the team being miniaturised and injected into a dying scientist. The seventh season, which just started airing in the USA, recasts the team as private investigators based in Los Angeles, with Archer and Lana now parents and in an apparently committed long-term relationship.

At its best, Archer is witty, clever, inventive and funny, mixing slapstick, satire and rapid-fire banter with action. The animation is effective and occasionally - especially in later seasons after a fairly obvious budget hike - spectacular, but many of the best moments of Archer come from when the characters are just standing around talking. The show is much smarter than it first appears, taking on subjects ranging from racism to corporate greed to government irresponsibility in a creative manner.

On the negative side of things, Archer is highly reliant on running gags, catchphrases and recurring villains and situations, which for some viewers will get older and more tiring faster than others. Barry the rival agent was amusing the first few times he appeared, but by the end of Season 4 that storyline had not only outstayed its welcome, but it had been wrung dry and become irritating. Fortunately, later seasons seem to realise this and are less reliant on recurring villains in favour of more original stories.

Archer (****) is a very funny, enjoyable and surprisingly sophisticated comedy series that is well worth watching. The first six seasons are available now on Netflix in the UK and USA, and Season 7 is currently airing on FX in the States.
Posted by Adam Whitehead at 10:36