Alan Moore is one of the most revered names in comics books, having written the seminal, acclaimed Watchmen, V For Vendetta and From Hell and contributed to many of the most famous names in the field, including Batman (most notably The Killing Joke), Superman (most famously Whatever Happened to the Man of Tomorrow?) and Swamp Thing. He has now announced that he has completed a one million-word prose novel for release this September. 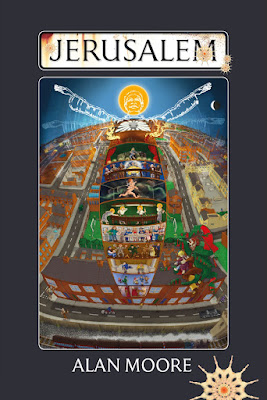 Moor has been working on Jerusalem for over a decade and has occasionally dropped hints as to what the book will be about. One element the book deals with is the "consciousness event horizon", the idea that our individual consciousnesses cannot conceive of our own deaths, so at the moment of death our consciousness "rewinds" to the moment of birth and we get to live our lives over again. Some ideas suggest we are trapped into making the same exact decisions and living the same life through each time, others suggest we have freedom to change things. What version of this idea Moore will be exploring, or if that old idea for the book even holds true, is unknown.

Based on the blurb, I suspect this will not be an easy read.

In the half a square mile of decay and demolition that was England’s Saxon capital, eternity is loitering between the firetrap housing projects. Embedded in the grubby amber of the district’s narrative among its saints, kings, prostitutes, and derelicts a different kind of human time is happening, a soiled simultaneity that does not differentiate between the petrolcolored puddles and the fractured dreams of those who navigate them. Fiends last mentioned in the second-century Book of Tobit wait in urine-scented stairwells, the delinquent specters of unlucky children undermine a century with tunnels, and in upstairs parlors laborers with golden blood reduce fate to a snooker tournament.

An opulent mythology for those without a pot to piss in, through the labyrinthine streets and pages of Jerusalem tread ghosts that sing of wealth and poverty; of Africa, and hymns, and our threadbare millennium. They discuss English as a visionary language from John Bunyan to James Joyce, hold forth on the illusion of mortality post-Einstein, and insist upon the meanest slum as Blake’s eternal holy city.

Fierce in its imagining and stupefying in its scope, Alan Moore’s epic novel, Jerusalem, is the tale of Everything, told from a vanished gutter.

Holy crap, that has to be the densest, most pretentious cover blurb I've ever read. I'm intrigued, and there's no doubt I'll have to check it out, but . . . wow.

Some quick googling tells me that one million words is more than twice the entire Lord of the Rings trilogy. That is... quite a hefty tome.