The world is falling into chaos. The gods are dead, the sun is frozen in the sky and a horde of dredge have erupted out of the northern wastes, destroying the lands of humans and varl before them. A great caravan has escaped out of the chaos, but its leaders have learned that the dredge themselves have been displaced by an even greater threat: a darkness that is spreading from beyond the north, consuming everything it touches. The last humans and varl converge of Arberrang, the greatest city in the land, to make a final stand and hope that the threat can be defeated. 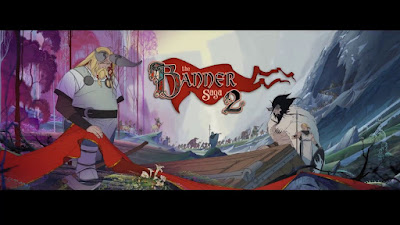 Released in early 2014, The Banner Saga was a remarkable game. Using an art style reminiscent of mid-20th Century Disney animated films and excellent, turn-based combat married to Battlestar Galactica-style story of people on the run and having to deal with moral complexities along the way, it was an excellent, original game. It was, however, let down by repetitive, grindy combat and a questionable decision to combine experience points (for levelling characters) and money (for buying supplies and equipment) into the same mechanic, dramatically limiting your ability to progress through the game. It also had a punishingly hard ending, although this was fixed with some post-release patches.

The Banner Saga 2 picks up days after the end of the previous game. The grand caravan has destroyed the dredge Sundr, Bellower, but is still having to flee westwards. The game opens with your caravan escaping downriver by boat. You pick up some new characters along the way and their perspective, helped by a handy "Previously on The Banner Saga" intro, quickly gets everyone up to speed on the plot. The original game started in media res and you were some way into the game before things started making sense, but The Banner Saga 2 is a bit more welcoming in that it sets up the plot and actually resorts to helpful exposition on occasion.

Not long into the game a major event takes place (which is so epic that I refuse to spoil it) and the caravan has to divide into two forces. The new, second caravan is led by the varl mercenary Bolverk and his company, the Ravens, and consists of the more morally dubious and financially-motivated members of the caravan. It's fascinating to play as this group, because they are much more amoral and inclined to act pragmatically, whilst the other caravan (led by whoever survived the final battle in the first game) is more inclined to honourable behaviour. Alternating between the two groups is fascinating. Both have their own troubles to overcome, with the main caravan having to brave a magical forest and political infighting amongst the human clans, whilst the second has to travel through a terrifying underground landscape and confront the true scale of the darkness growing in the north. Both storylines unfold with pitiless inevitability. The story choices you have to make are often hard, and however you proceed there will be deaths and chaos.

Combat is much-improved from the first game. There are far more unit types on both sides than before, and the introduction of the centaur-like horseborn, several new human factions and new types of dredge (including a new Sundr) result in much more varied gameplay than before. There are also new battlefield obstacles that have to be negotiated and the ability to assign characters not in your main party to supporting roles. Combat was solid in the first game, but is absolutely superb in the second. You also get more renown for winning battles, which helps with the balancing the need to level up characters with keeping your followers fed. 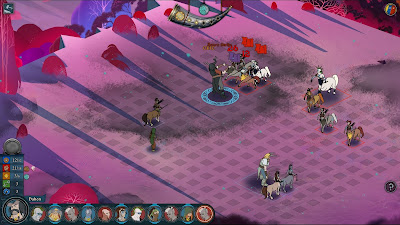 As with the first game, it is graphically beautiful and the music is absolutely fantastic. But what this series has done so well is the atmosphere, the feeling of a land that is dying and slipping into oblivion and the last few survivors making a stand against the darkness no matter the cost. Few video games have managed to instill such a feeling of desperation into things (Mass Effect 3 and XCOM occasionally came close), and never so consistently. It's a gripping game that demands "just one more go".

The biggest problem with the game is length. These are low-budget but also low-cost games, so The Banner Saga coming in at around 9 hours in length felt just right. The Banner Saga 2 clocks in at just over 6 hours, which does feel a little too short. The pacing is tremendous and you certainly get your money's worth in terms of atmosphere and replayability, but the short length of the game did feel a little disappointing. But The Banner Saga 2 is the first game since Max Payne 2 (2003) to have such a short length but really sell it quite well. The story also ends on a cliffhanger, but considering this was a planned trilogy from the start, that's not a surprise.

The Banner Saga 2 (****½) is a short game but makes up for that with a gripping story, a fantastic world and tremendously entertaining, conflicted and haunted characters. This is a video game that can stand toe-to-toe with the best of fantasy literature for the world it has created. It is available on PC now and is coming to tablet and consoles later this year.
Posted by Adam Whitehead at 17:20