Details of the new Star Trek TV series have allegedly leaked. Treat this as rumour for now, but it actually sounds quite promising. 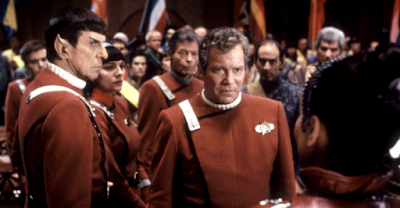 First off, the new series will apparently adopt the anthology format of shows like Fargo and True Detective: set in the same universe but each season will be a self-contained narrative. The cast, time period and premise may shift every year. This is actually a great idea, allowing the series to experiment and do new and interesting things each season.

Secondly, the first season will apparently be set in the original "Prime" universe some time after the events of Star Trek VI: The Undiscovered Country and the past scenes in Star Trek: Generations, but some time before the events of Star Trek: The Next Generation. The show will not be set on a USS Enterprise (in the show's continuity, this time period would either see the Enterprise-B or Enterprise-C in operation) but will involve another ship and crew on another mission. The series will be "heavily serialised", effectively telling one story over 10 or 13 episodes.

The series will also apparently feature a villainous group of Klingons. In the franchise's continuity, the Federation and Klingon Empire initiated peace discussions during the events of Star Trek VI but a formal alliance did not come into existence until fifty years later, when the Enterprise-C sacrificed itself to save a Klingon colony from Romulan attack. This gives the writers a lot of leeway in where and when they set the show.

Meanwhile, CBS have confirmed they can't debut the series until six months after Star Trek: Beyond, the next feature film, is released on 22 July. That puts the debut date for the series back until the end of January 2017 at the earliest. Casting for the show is expected to be confirmed in the next few months, with shooting to start in the summer or autumn, so that tracks. This also hints at something previously rumoured: that CBS do not have the rights to the "Abramsverse" that the new films are set in, so must either use the existing continuity or set up a completely new one (which would likely be even more confusing).

Bryan Fuller (Star Trek: Deep Space Nine and Voyager, Heroes, Hannibal, American Gods) and Nicholas Meyer (the writer-director of Star Trek II: The Wrath of Khan and The Undiscovered Country) will be among the writers and producers of the new show, whilst actor Tony Todd (who played both Kurn and the adult Jake Sisko on The Next Generation and Deep Space Nine) has auditioned for an unspecified role.

This is all unconfirmed rumour, just to be clear, but my interest in the project has suddenly skyrocketed.
Posted by Adam Whitehead at 13:44