DUNGEONS AND DRAGONS movie gets a director

The new Dungeons and Dragons movie set in the Forgotten Realms world is reportedly close to getting a director. 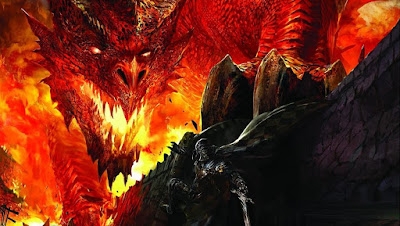 Rob Letterman is close to signing up to direct the movie. Letterman is responsible for CGI movies Monsters vs. Aliens and A Shark's Tale, but recently moved into live action with poorly-received Gulliver's Travels and the much more well-regarded Goosebumps. He has also worked as an animator and effects person on films such as Lake Placid and the original Shrek. His previous work appears to be reasonable (the misfire of Gulliver's Travels aside) and his familiarity with effects and blending CGI and live action can only help with the project.

More concerning is the script by David Leslie Johnson. Johnson's previous work - Orphan, Red Riding Hood and Wrath of the Titans - has been mostly risible. The plot synopsis for the film does also not sound hopeful:


"Based on the popular fantasy role-playing game Dungeons & Dragons originally designed by Gary Gygax and Dave Arneson and first published in 1974, the action-adventure tale centers on a warrior and his band of mystical creatures – including a half-dragon and a cunning gnome – as they embark on a dangerous journey to find a mythical treasure."

Hasbro and Warner Brothers are hoping to create a massive, multi-world, multi-character franchise with the film, with later films spanning the numerous different Dungeons and Dragons worlds. This means a lot is riding on the first film. Unfortunately, the talent assembled so far has not been spectacular. Hopefully we'll still get a fun movie out of it, but once again the obvious, money-printing option of simply adapting one of the multi-million-selling D&D spinoff novels has been ignored for no apparent reason.

The D&D movie looks likely to shoot later this year for release in 2018.
Posted by Adam Whitehead at 16:48

Email ThisBlogThis!Share to TwitterShare to FacebookShare to Pinterest
Labels: dungeons and dragons, forgotten realms, hasbro, news, wizards of the coast