New US covers for MEMORY, SORROW AND THORN

Tad Williams's classic Memory, Sorrow and Thorn trilogy is being rejacketed for a new American trade paperback edition being launched later this year. 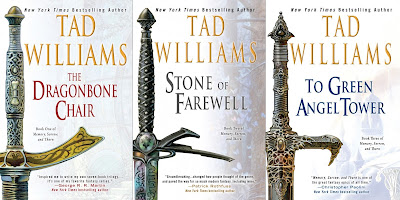 The new editions come ahead of the publication of two new novels set in the same world, the stand-alone (ish) The Heart of What Was Lost in January 2017 and then The Witchwood Crown, the opening volume of The Last King of Osten Ard, in April 2017.

I presume from the descriptions in the books and the order of the series title that the swords depicted are Minneyar, Sorrow, and Thorn, respectively, in that order? The paintings are beautiful. Not quite how I envision Thorn, but beautiful nonetheless.

Do you perhaps have a date for when the "new" books will be open for order? My old copies are gone and I would like to re-read before the new books come out?

I know one of the central themes is the wurd of the swords but I don't like those covers one bit. Generic fantasy guff.