Gareth Thomas, the Welsh actor best-known to SF fans for playing the titular role in classic BBC space opera Blake's 7, has passed away at the age of 71. 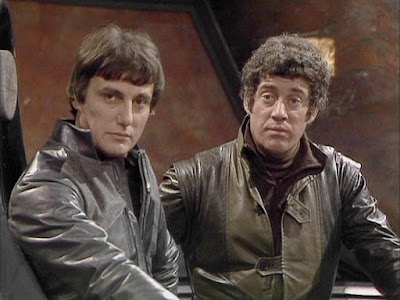 Kerr Avon (Paul Darrow, left) and Roj Blake (Gareth Thomas, right) in Blake's 7, no doubt about to have another battle of wits and wills.

Thomas trained at RADA and was twice nominated for a BAFTA in a long and distinguished career on stage and screen. His TV credits include The Avengers, Z-Cars, London's Burning, Taggart and Torchwood.

However, his most famous role was as freedom fighter/terrorist (a blurry distinction the TV series enjoyed exploring) Roj Blake in Blake's 7. The series ran for four seasons from 1978 to 1981 and, famously, Blake was only a regular character in the first two seasons (although he did make guest appearances in the third and fourth). Blake was an idealist, a charismatic leader who'd been wiped of his memories and framed for child abuse to discredit him as a freedom fighter. In the series he seized control of an alien starship, the Liberator, and led a guerrilla war against the despotic Terran Federation. Much of Thomas's role was spent in having darkly humorous arguments about the morality of what Blake was doing and his motivations with the much more cynical, selfish and power-hungry Kerr Avon, played by Paul Darrow.

Thomas departed at the end of the second season, his dreams crashing down in ruins all around him as the Liberator crew is forced to join forces with the Federation to fight off an alien invasion from another galaxy. He memorably returned in the series finale, when he was gunned down by Avon who was (erroneously) convinced that Blake had betrayed him to the Federation, an ending that won massive ratings and shocked the entire British TV-watching audience at the time.

Thomas remained active in the Blake's 7 fan community, attending conventions and taking part in several official audio adventures, reprising the role of Blake. However, unlike Darrow he did not get involved in any of the various attempts to reboot or relaunch the series.

Gareth Thomas has passed away due to heart failure. My condolences to his family.
Posted by Adam Whitehead at 22:28