Tor UK have revealed the UK cover art for Night Without Stars, the forthcoming second part of Peter F. Hamilton's Chronicle of the Fallers duology. 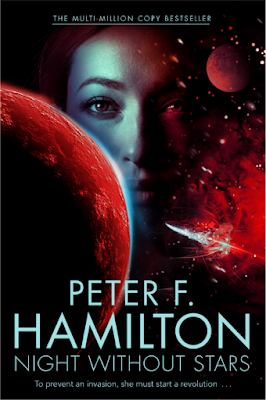 
"The planet of Bienvenido is on its own, isolated from the rest of the universe. And it’s waging war against the ruthless Fallers, aliens which have evolved to conquer whole worlds. Kysandra is leading an underground resistance, aided by biological enhancements that give her a crucial edge. But she fears she’s fighting a losing battle. This is especially as the government hampers her efforts at every turn, blinded by crippling technophobia and prejudices against enhanced 'Eliter' humans. However, if the resistance and government can’t work together, humanity on this planet will face extinction – for the Fallers are organizing a final, decisive invasion. Bienvenido badly needs outside help. But the Commonwealth, with all its technological expertise, has been lost to them for generations. Desperate times will call for desperate measures, or humanity on Bienvenido will not survive."

Night Without Stars will be published on 22 September this year.
Posted by Adam Whitehead at 15:29

Email ThisBlogThis!Share to TwitterShare to FacebookShare to Pinterest
Labels: cover art, news, night without stars, peter f. hamilton, the chronicle of the fallers