A couple of weeks back the Sandman movie project suffered a double blown when producer Joseph Gordon-Levitt and writer Jack Thorne left, citing "creative differences" with New Line. Thorne has his new gig already lined up, as he has joined the BBC's adaptation of Philip Pullman's His Dark Materials as head writer. 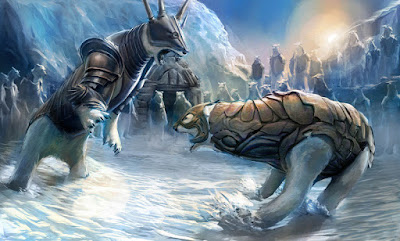 The BBC and Bad Wolf Productions announced a few months ago that they were going to be working on His Dark Materials, adapting the three novels (Northern Lights, The Subtle Knife and The Amber Spyglass) as five television seasons of eight episodes each. Bad Wolf is a new production company formed by ex-BBC producers and executives Jane Tranter and Julie Gardner, whose biggest previous success was the resurrection of Doctor Who in 2005. As well as His Dark Materials, they are currently working on a TV version of Bernard Cornwell's Warlord Chronicles trilogy, although that appears to be at a much earlier stage of development.

Thorne has been on a bit of a roll recently. He wrote and created the hugely-acclaimed The Fades for Channel 4, and was a leading writer on the popular drama series Skins. He was nominated last week for three BAFTA Awards, for The Last Panthers, This is England '90 and Don't Take My Baby. He's also the co-writer - with J.K. Rowling and John Tiffany - of the upcoming stage play Harry Potter and the Cursed Child.

The Dark Materials TV series will be completely unrelated to the 2007 movie The Golden Compass, starring Daniel Craig, which was based on the first novel in the series but was not a major box-office success.
Posted by Adam Whitehead at 18:41