Neil Gaiman has confirmed that he will be scripting a six-episode mini-series based on his 1990 collaboration with Terry Pratchett, Good Omens. 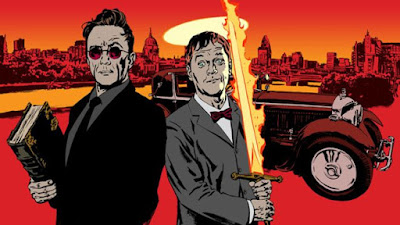 Gaiman had previously decided not to proceed as a writer on the project, believing it should only be done between him and Pratchett. Pratchett passed away last year, meaning that it was likely that the project would have to be given to another writer. However, Pratchett left behind a letter to be given to Gaiman in the light of Pratchett's death, in which he asked Gaiman to handle the project.

The BBC had previously been interested in the series when it was mooted as a 13-part series, but budget cuts at the BBC seem to have removed their interest. Cutting the story to six parts might be enough to reignite their interest, especially after their bullish recent performance with expensive-looking period and genre dramas such as Wolf Hall, Jonathan Strange & Mr. Norrell, The Last Kingdom and War and Peace. Good Omens also did well for the BBC as a radio drama in 2014, starring Peter Serafinowicz and Mark Heap as angels Crowley and Aziraphale.

In the same article, Narrativia, the production company set up by Pratchett before his death, confirmed that it was continuing to develop an ongoing TV series based on the City Watch storyline in the Discworld novels and it was also working on a film based on the novel Mort, with Hollywood scriptwriter Terry Rossio (Shrek, Aladdin, Pirates of the Caribbean: The Curse of the Black Pearl) developing a script.

It sounds like Good Omens is a bit further along than the other two projects, and hopefully we may be hearing more news about it soon.
Posted by Adam Whitehead at 01:43