The Harmonic Convergence has resulted in unforeseen consequences, including the return of airbending to the world. Korra, after a public falling-out with the President of the United Republic due to her decision to allow spirits to enter the physical world, teams up with Tenzin to recruit the new airbenders to help restart the Air Nomad Nation. Unbeknown to Korra, a criminal named Zaheer has gained the power of airbending and seeks to reunite his old gang of elite benders, the Red Lotus, to renew their quest to find and eliminate the Avatar...permanently. 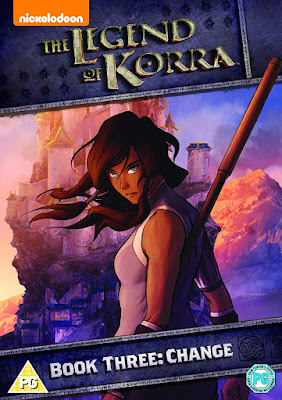 The second season of The Legend of Korra was a major disappointment, the first letdown provided by the five seasons (at that point) of the combined Avatar: The Last Airbender/Legend of Korra franchise. The third season of Korra has a lot riding on it: is the rot permanent or could the show recover?

Fortunately, the latter is the case. The third season of The Legend of Korra drops a lot of the more spiritual and nebulous elements of the previous show in favour of a much firmer story. A charismatic enemy, voiced by Henry Rollins, assembles a notable "anti-Team Avatar" to take down Korra. The spine of the season is Korra taking the fight to Zaheer and working out what his motivations are. These motivations are complex and less concerned with power than freedom, verging on anarchy. The bad guys are thus presented as having somewhat understandable motivations, but are over-zealous in their application. These ideas are sophisticated for a kids' show but presented well. It's particularly interesting to see the scale of the struggle and the price of victory.

There's also a lot of excellent subplots, such as the recruitment of the new airbending recruits and Tenzin's difficulties in establishing himself as a leader, and the introduction of Lin's family and the city of Zaofu. We learn more about metalbending and the new art of lavabending as well.

The Legend of Korra's third season (****½) is the show getting its mojo back and becoming compelling viewing, the finest season of the show overall. The season is available now as part of the complete series box set (UK, USA) and on Amazon Prime worldwide.
Posted by Adam Whitehead at 12:32