Lyra Belacqua is an orphan being raised at Jordan College, Oxford, under the watchful but remote eye of her scientist guardian, Lord Asriel. A visit by Asriel with a controversial new theory coincides with a spate of child disappearances, including of Lyra's best friend. Lyra's investigations will lead her into a remote northern wilderness and the discovery of a mysterious substance called Dust, which holds the key to travelling to other worlds. 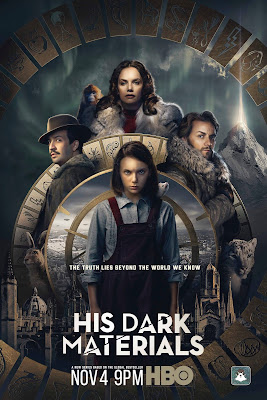 Philip Pullman's His Dark Materials trilogy was sold as the edgy, punk rock version of late 1990s children's literature. Whilst most such literature at the time was safe and predictable, His Dark Materials is darker, more challenging and takes its young readers on a much smarter, more thought-provoking journey that includes criticism of indoctrinated dogma and engaging with real issues in growing up. It proved controversial, especially in the United States, where outraged religious groups did their best to tank the previous 2007 movie version of the series, The Golden Compass.

Proving you can't keep a good idea down, though, the BBC has joined forces with HBO to create a fresh adaptation which will hopefully bring all three of the original books (Northern Lights, The Subtle Knife and The Amber Spyglass) to the screen, whilst also adapting elements from the still in-progress Book of Dust prequel/sequel trilogy.

The adaptation this time around is considerably longer and more in-depth than the film, whilst also covering most of the same (dark) material. Once again we see Lyra leave her comfortable life at Oxford and being drawn into an adventure  that takes in missing children, armoured sentient bears and interdimensional travel. The show takes advantage of its longer running time to make some bolder choices, such as introducing the character of Will Parry much earlier and providing some more of his backstory instead of just joining his story in-situ. This raises the stakes and gets the viewer more invested in the dimension-hopping part of the story, which otherwise only becomes a major factor in the second volume in the series.

The extra running time gives the writers the opportunity to explore the story and characters much more in-depth, which benefits characters like Lord Boreal (a breakout performance by Ariyon Bakare) and Mrs. Coulter (a magisterial Ruth Wilson) tremendously. The early episodes in particular benefit from this decision, giving us more time to see Lyra in Jordan and then in her increasingly uncomfortable position as Mrs. Coulter's assistant. However, it ultimately proves to be a little too much of a good thing: the film failed to do the relatively short novel justice in two hours, but at eight hours the TV shows goes a little too far in the other direction and we have a few too many wheel-spinning moments in the later episodes. Perhaps six episodes would have sufficed instead.

The show's other weakness is the surprisingly subdued portrayal of Lyra. Dafne Keen does splendid work with the material she's been given, but it's definitely not the more energetic and spirited performance from the books. This does change as the season progresses and Lyra gains in confidence and character depth, but it's a curious choice that may disappoint book fans.

Beyond those two issues, the show is a success. The visual effects are excellent (the armoured bears in particular, which trounce the video gamey ones from the movie, show how far TV fx has come in a decade), the soundtrack is absolutely superb, the performances are great and most of the minor changes to the plot work extremely well. There's an escalation in intensity throughout the season, with the superb final episode successfully pulling off the shift in the books onto a more epic scale and giving more layers to Lord Asriel (an excellent, if relatively brief, performance by James McAvoy). It certainly leaves the viewer eager to see the next season as soon as possible.

His Dark Materials' first season (****) is a major improvement over the film version of the same story and makes for a mostly gripping drama with great performances. The pacing is a little stretched in the second half and could have done with some tightening, and some book fans may question some minor character changes from the book, but overall this is an entertaining and enjoyable adaptation. It is available to see via the BBC iPlayer in the UK and HBO in the United States. A second season has already been filmed and will air later in 2020.
Posted by Adam Whitehead at 13:36

This new Lyra is major weakness of the show, the good thing is they added plenty of new stuff without her