Cyberpunk 2077, comfortably the single most eagerly-awaited video game of 2020, has slipped five months from its original release date. 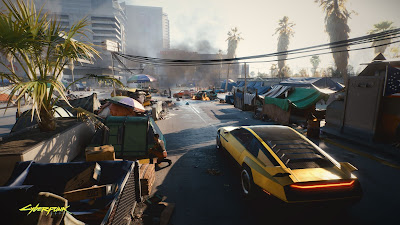 The huge, open-world CRPG, based on Mike Pondsmith's classic 1980s tabletop game Cyberpunk 2020, has engendered massive pre-release coverage after recruiting man-of-the-moment Keanu Reeves to star in the game as cult character Johnny Silverhand. The developers, CD Projekt Red, are riding high at the moment as their previous game, The Witcher 3: Wild Hunt, has seen a huge boost in sales after the success of the Netflix TV series.

Reeves announced the game's original release date (16 April 2020) last year. Since then, CDPR has been working on polishing the game into a release-ready state. However, the company had also vowed to avoid the punishing crunch that marked the release of The Witcher 3 and led to several key developers leaving the company after the game came out.

The new release date is 17 September 2020, which CDPR is more hopeful of hitting.
Posted by Adam Whitehead at 19:34