Ned Stark (not that one) joins LORD OF THE RINGS: THE SECOND AGE

Amazon's The Lord of the Rings: The Second Age TV project has added some more Game of Thrones experience to its roster. Robert Aramayo, who won acclaim for portraying the younger version of Ned Stark in Season 6 of Game of Thrones, has been cast in the series. He is replacing Black Mirror's Will Poulter, who was previously cast but then had to drop out due to a scheduling clash. 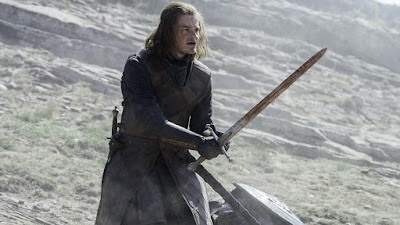 Despite widespread rumours that Poulter was playing a younger version of Elrond Halfelven (memorably portrayed by Hugo Weaving in Peter Jackson's movie trilogy), the role appears to be for a human protagonist named "Beldor," although Amazon remain tight-lipped on the details.

There is some synergy in this casting, as the older version of Ned Stark was played by Sean Bean, who famously portrayed Boromir in the Lord of the Rings movie trilogy.

The Second Age is a prequel set roughly 5,000 years before the events of The Hobbit and The Lord of the Rings. Although the precise time period has not been confirmed, the series will likely explore the forging of the Rings of Power, the early conflicts between Sauron and the elves and the emergence of the powerful island nation of Numenor (who inhabitants are the distant ancestors of Aragorn, Boromir, Faramir and Denethor). The series starts full-time production in New Zealand shortly and is expected to debut on Amazon in mid-to-late 2021. Aramayo marks the second Game of Thrones veteran to join the project, with writer-producer Bryan Cogman working as a consultant on the series and is expected to step up as a writer for the already-confirmed second season.

It will be the second of three major fantasy projects to hit Amazon; The Wheel of Time (based on Robert Jordan's novels) is currently roughly halfway through shooting its first season and is expected to hit screens in late 2020 or early 2021. Amazon are also prepping a new adaptation of Stephen King's The Dark Tower series, unrelated to the 2017 movie version.
Posted by Adam Whitehead at 22:45