Mid-1985. After releasing two models of the Cardiff Giant computer, Cardiff Electric is sold off and Gordon Clark gets a big payday. Joe MacMillan gets nothing. Rather than being annoyed by this, Joe moves on with his life and joins his new girlfriend's father's oil company. Donna and Cameron have started a software business, Mutiny, specialising in online gaming. The gang are inadvertently reunited when Joe hits on the idea of using the oil company's mainframe to set up network servers for online computing, and stress-tests it with Mutiny's service. What seems to be an equitable arrangement for all involved is then tested when the oil company CEO realises how much money could be made from this new field. 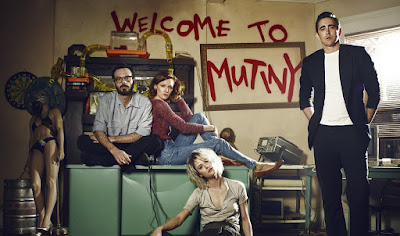 Halt and Catch Fire may be the longest-running example of the "mundane drama," a type of drama where everyday, relatively standard situations are turned into gripping stories where the stakes feel much higher than they really are (HBO's Show Me a Hero, about housing zoning disputes in 1980s Yonkers, may be the ultimate example of how to take something that sounds dull as dishwater and turns it into sheer brilliance). The 1980s period setting and the stories revolving around the creation of the foundation of the computer systems and networks we all use today do give added relevance to the premise.

The first season of Halt and Catch Fire was solid, but suffered a little from being not sure what direction to take with the tone. The show sometimes played things straight and sometimes went a bit weird, veering towards being an "8-bit Mr. Robot" without fully committing to that level of strangeness. Season 2 lands exactly where it wants to be, more offbeat and stylised than the first season but without going as fully strange as Mr. Robot and remaining fully accessible.

Season 2 instead, refreshingly, focuses on a contrite Joe as he tries to make amends for the things he did to his supposed friends in the first season and ends up helping them out...only to have the decisions taken out of his hands by his decidedly money-grubbing boss, Jacob (James Cromwell making you wonder why we haven't seen him playing more villains in his career). Joe's attempts to try to make things right inevitably lead to more disasters. This makes the viewer more sympathetic to Joe than in the first season, when most of the problems resulted from his own arrogance, and Lee Pace carries off the shift in character marvellously.

The rest of the cast does sterling work, especially Kerry Bishe and Mackenzie Davies as their software business runs into rocky waters and they try to negotiate the needs of a business with Cameron's desire to to stay true to her punk socialist roots. Scoot McNairy as Gordon does feel a little isolated from the rest of the cast, as the writers didn't want to have everyone involved in the same storyline, so Gordon gets to go off and do some soul-searching and self-discovery which is good for the character but also the only moments in which the show threatens to be anything less than brilliant in this run.

Events intensify as the season continues and more things go wrong than you could possibly imagine, until the series gets its first outstanding moment of awesome (set to a particularly accomplished Joy Division cover) and the plotting and character arcs come together in a fusion of storytelling that is magnificent to behold.

Halt and Catch Fire's second season (*****) is compelling, brilliantly-written and acted television. It does leave the question about where the series can go next, with the answer feeling perhaps a little contrived, but the series has certainly earned the viewer's trust in seeing if it can pull it off. The series is available to watch now on Amazon Prime in the UK and USA.
Posted by Adam Whitehead at 18:45

Cromwell did of course play one iconic villain on the big screen, and was magnificently villainous, albeit with an incredibly dodgy accent - L.A. Confidential.

In HACF, I like how villainous Cromwell isn't. It's a one-note character that would be very easy to play in a scenery-chewing, moustache-twirling way. Instead, Wheeler comes across as polite, practical, a bit domineering but not unable to see others' points of view or to see the limitations of his own, and committed to at least his own version of fair play. It's just he's entirely devoid of empathy, completely ruthless, and sees everyone else as an obstacle in his way. He'll make you a fair offer so you can both be happy, but if you say no, he'll do it his own way anyway and blame your unhappiness on you not being smart enough to go along with him.

In a way, he's someone Joe and Donna at times see themselves as being, but can't really measure up to (ironically, Cameron is the one who's actually most like him, I think - her objectives may be very different from his, but she goes about reaching them in a similar way). I also like how, at the end there, Joe's confronted with that Bizzaro Joe character - who on the one hand is a pale imitation of Joe (his guff is truly as facile as Joe's sometimes sounds), and in another way is the real deal to Joe's imitation (he's ruthless in a way Joe portrays himself as, but isn't really prepared to embrace).

Regarding the contrived new direction - I assume you mean the new location? I think that has to be seen in historical context - throughout the first two series, it exerts a kind of gravitational pull on all the characters in that subculture/industry, and of course we know that, historically, it's where they have to end up. So I think there's an inevitability there that made it feel less contrived. But I agree that in the text of the episodes, it does come a bit out of nowhere...