The Five Kingdoms are on the brink of war with the elven kingdom of Xadia, a situation expertly brought to pass by the Machiavellian Chancellor Viren. Prince Ezran has returned to Katolis to bring about peace whilst his brother Callum returns the Dragon Prince to Xadia and eases the tensions, but he finds his fellow kings and nobles in no mood to listen to him. Meanwhile, Callum and Rayla discover they have to negotiate a series of fresh dangers as they try to reach the heart of Xadia, where the Dragon Queen lies in a dangerous slumber. 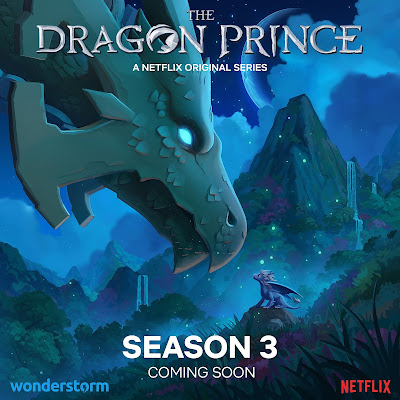 The Dragon Prince is a highly imaginative, entertaining animated fantasy show from some of the same team who made Avatar: The Last Airbender. The first two seasons were solid, entertaining and fun and Season 3 continues in that vein. If you like your fantasy relatively fast-paced, but with great character development, this is the show for you.

Season 3 of The Dragon Prince mixes together of political intrigue with more traditional action-adventure storylines, building all the while to an epic conclusion. Although The Dragon Prince is not finished - it will run for seven seasons in total - it has now reached the end of its first major story arc, with two more, two-season arcs to follow. The result is a faster-paced show than previously, which has good points (especially when compared to the relatively little ground that Season 2 covered) and bad ones.

The first big negative is that the decision to have Ezran return to Katolis to claim the throne feels a bit redundant. If this had been a four-season arc, having Ezran return home for a full season would have made sense, but in this case he's barely back before he's setting out on a new adventure. It feels like just keeping him with Rayla and Callum would have worked better for pacing, and avoided a horribly contrived sequence when a massive army covers all of the ground that it took Rayla and Callum weeks to cross in just a few days (a particularly awkward bit of worldbuilding the show tries to paper over and fails).

The second negative is that Viren spends more than half the season locked up in a dungeon. It's probably not a massive spoiler to say that he leaves the dungeon and causes more mischief later on, but by delaying that moment it leaves an awful lot of story to pack into just a few short episodes, and it doesn't really work (turning Viren into a bit of a chump for his new elf friend Aaravos is also questionable). There's also the questionable decision to completely drop and ignore the suggestion from the first two seasons that King Harrow is actually still alive.

On the plus side, there's plenty of excellent character development for Soren and Amaya, who both have more to do than in the previous seasons, and our journey through Xadia results in some highly enjoyable set pieces, such as the crossing of the Midnight Desert, and a lot more building up of the backstory and lore, such as finally getting to see the confrontation between King Harrow and the Dragon King.

Season 3 of The Dragon Prince (****) overcomes some iffy pacing problems to deliver another enjoyable slice of adventure fantasy. The series is available now on Netflix.
Posted by Adam Whitehead at 19:05

There were some good moments (winged elf in the desert, take over of the city of sun elves, the very last scene), but overall the show is very far below the Avatar. In the Avatar and Korra they did carefuly show bad sides and embarrasing mistakes of main characters, while no one did really slip into one-sided villain. Here only Cloudia is an interesting character, everyone else is more or less one sided. Human evil prince and princess who beats everyone is just pathetic. Also Bait is nothing compared to Appa and Momo.
The bright side is visuals wich is beautiful and impressive.