Christopher Tolkien, the third son and literary heir of J.R.R. Tolkien, has sadly passed away at the age of 95. 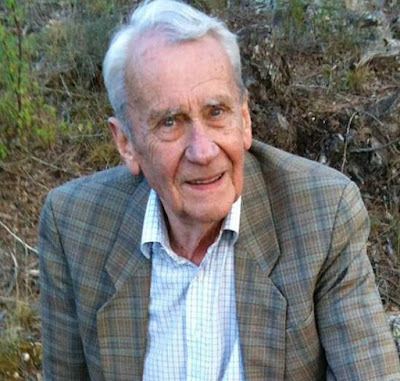 Born in 1924, Christopher was the youngest of J.R.R. Tolkien's three sons (he is survived by a younger sister, Priscilla, born in 1929) and the most like his father in character and interests. J.R.R. Tolkien had already begun writing stories about Middle-earth in 1917, but it was his decision to write a children's book set in the same world - The Hobbit - around 1929-30 which attracted the interest of his children. Christopher was particularly taken by the story, keen to hear how it ended and helping his father type up the manuscript when it was accepted for publication in 1937.

It was Christopher whom his father confided in during the writing of The Lord of the Rings. In 1944 Christopher joined the RAF and was sent to South Africa for his flight training. His father had been struggling with the huge book but Christopher's absence inspired him to write the sequence which became the second part of The Two Towers, charting Frodo and Sam's journey to Mordor. He wrote up each chapter and sent it (with notes and annotations) to Christopher as a serial to help him pass the time between training operations.

With the end of WWII and his return to the UK, Christopher studied English Literature at Trinity College, Oxford, and joined the Inklings literary group, of which his father had been a founding member. In the 1950s, Christopher acted as an informal editor and map-maker on The Lord of the Rings, producing the maps of Middle-earth and the Shire that accompanied the novels (at one point staying away for twenty-four hours solid to hit a production deadline). He continued to act as his father's advisor and confidante during the extremely long gestation of The Silmarillion. In the late 1960s, when J.R.R. Tolkien realised he might not live long enough to complete the book, he granted Christopher permission to complete the book for publication.

Despite the monumental achievement of assembling and understanding J.R.R. Tolkien's often-contradictory and confusing morass of drafts, partially-completed manuscripts and half-scribbled maps into working texts, Christopher continued to second-guess and worry about his editorial decisions. In the interest of maximum transparency, he decided to make all of his father's Middle-earth material publicly available so that other Tolkien scholars could look through the manuscripts and see if they came to different conclusions. This resulted in the massive, twelve-part History of Middle-earth series, which assembled every single one of J.R.R. Tolkien's extant writings on Middle-earth with extensive analysis and commentary (including four volumes dedicated almost entirely to the writing of The Lord of the Rings). The series was published between 1983 and 1996.

Christopher Tolkien was sceptical over the value of film, television and video game adaptations of his father's work. As his father had sold the TV, film and media rights to The Hobbit and The Lord of the Rings in 1969, Christopher was unable to prevent such projects from moving forwards, but as the head of the Tolkien Estate he barred other Estate members from approving of or supporting these endeavours. When his son Simon travelled to New Zealand and visited the set of Peter Jackson's Lord of the Rings movie trilogy, Christopher disowned him and the two did not speak for many years, although they eventually reconciled.

Christopher also refused to sell the film or TV rights to The Silmarillion and Unfinished Tales, despite interest from production companies. In the wake of Jackson's movies, Christopher did release "selected cuts" from Unfinished Tales and The History of Middle-earth as three approachable, commercial editions for the more casual reader: The Children of Hurin (2007), Beren & Luthien (2017) and The Fall of Gondolin (2018).

Christopher Tolkien resigned as chair of the Tolkien Estate in August 2017. Shortly afterwards, Amazon and the Tolkien Estate reached a new agreement for the production of a new TV series set roughly 5,000 years before the events of The Lord of the Rings. The Lord of the Rings: The Second Age is currently in production in New Zealand for possible release in 2021 or 2022.

Christopher Tolkien spent the latter decades of his life living in France. In 2016 he was awarded the Bodley Medal for his services to literature. He is survived by his second wife, Baille, three children (Simon, Adam and Rachel) and two grandchildren.

Christopher Tolkien is arguably the most important editor of fantasy fiction of the last century. Without his father's trust, it is entirely possible that The Silmarillion and the other writings of his father would never have been published, and a vast swathe of background material about Middle-earth would have been effectively lost forever. Christopher is to be commended for his restraint in only editing and publishing work actually written by his father, when he could have cashed in by writing Middle-earth fiction of his own.

What the future holds for the Tolkien legacy is now uncertain, and with the Amazon TV series we may be seeing a more commercial future unfolding, but Christopher's work in furthering his father's legacy is almost beyond reproach, and he will be missed.
Posted by Adam Whitehead at 20:17