Another WHEEL OF TIME episode title and director confirmed

We now have a new Wheel of Time episode title. 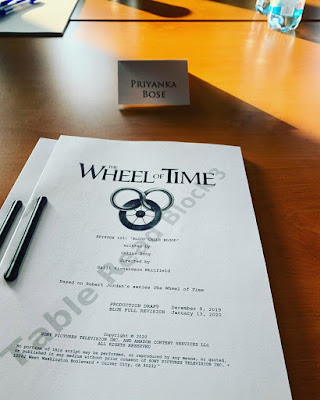 The fifth episode of the first season will be called Blood Calls Blood, written by Celine Song and directed by Salli Richardson Whitfield. The photograph comes from the third table read block (each table read accounts for two episodes of the season).

Actress Priyanka Bose, who is playing the Aes Sedai Alanna, revealed the story via her Instagram Stories account. This of course confirms that Alanna will be in either the fifth or sixth episode of the season (or both).

The title is from the "dark prophecy" that appears at the start of The Great Hunt, the second novel in the series. This may hint at that the fifth episode will reach the start of The Great Hunt, but much more likely is that the title is being used early. The fifth and sixth episodes are believed to focus on a new storyline in which we follow the Aes Sedai and armies opposed to the false Dragon Logain and see him being captured, an event which happens off-page in The Eye of the World, the first novel in the series.

The full list of episodes so far is as follows:

As usual, more news when we get it.
Posted by Adam Whitehead at 15:15