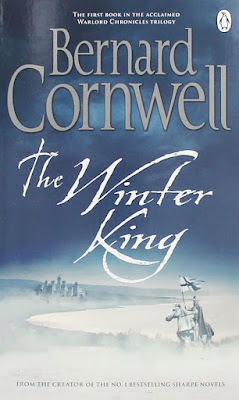 The Warlord Chronicles consists of three novels: The Winter King (1995), Enemy of God (1996) and Excalibur (1997). The Warlord Chronicles are a "realistic" take on the legend of King Arthur, set during the 5th and 6th Centuries in a Britain riven by religious and political turmoil. The Roman Empire has collapsed, but some of the Roman settlers and armies remain. The native Britons are trying to re-establish themselves, but the first waves of Saxons are starting to invade from the east. Roman religious cults and the newly-arrived religion of Christianity are struggling against the native pagan druids and other old faiths. It's a time of great danger, enhanced when King Uther Pendragon of Dumnonia dies and the protection of his infant son and heir Mordred falls to Uther's bastard child Arthur. Unable to ever become king, Arthur instead takes on the mantle of Warlord. Arthur's stewardship sees Dumnonia - rendered "Camelot" by later chroniclers - become a great power but it is sore-pressed by both internal and external pressures. The story is also notable for being told from the point of view of Derfel Cadarn, a very junior member of Arthur's circle, rather than from one of the better-known characters of the legend. The whole story is being related in exacting detail by Cadarn to some monks. To his horror, they start "sexing up" the stories with magic swords and ladies in lakes, forming the legend as we currently know it.

The Warlord Chronicles is often cited as Bernard Cornwell's strongest work, and the most successful version of the Arthurian legend of recent decades.

Epix is a relatively obscure American cable network, although it his scored some hits with the likes of Godfather of Harlem, Perpetual Grace LTD and Pennyworth. Their plan is to adapt the series under the title The Winter King. So far the project is only in development and has not yet been given a pilot order.

Bad Wolf optioned The Warlord Chronicles in 2015, but has delayed work on the show whilst they were getting The Night of, A Discovery of Witches and His Dark Materials underway.
Posted by Adam Whitehead at 14:18

Peter Jackson if your reading this, this is your next trilogy. Please make them!!!

I love they way Bernard Cornwell writes his characters and this trilogy is one of my favorite book series, I also love the Last Kingdom series. But I have dreamed of his retelling of the Aurthurian legend and Excalibur made into a movie or series......... I just pray they do thier homework and dont destroy it.

Cornwells best work. They had better do it justice with a good budget and good actors

I am just reading the last of the trilogy of books, "Excalibur" and watching "The Last Kingdom". Then I find out they're making "The Winter King" series. Saying I'm overjoyed is an understatement! Fell in love with anything by Bernard Cornwell when I first saw the "Sharpe" series.