The first publicity photographs from The Watch, a BBC America series "loosely inspired" by Terry Pratchett's Discworld novels, were released this morning and in just a few hours have prompted a massive backlash from fans of the series. Beloved characters and settings have been changed for no immediately discernible reason, resulting in a storm of protest from readers. 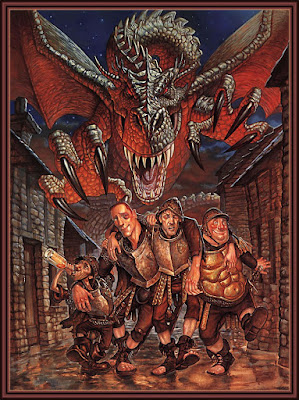 In an amusingly-timed move, Terry Pratchett's daughter (and respected video game writer) Rhianna Pratchett and his former assistant and partner in Narrativia Productions, Rob Wilkins, both tweeted a link to a 2004 interview with Ursula Le Guin, where she eviscerated the Sci-Fi Channel's appalling mini-series based on her Earthsea novels which changed the source material for no reason.

Unfortunately, with production drawing to a close on the eight-part series, it's far too late for BBC America to change course and produce a more faithful adaptation of the books. As a result, it's likely that fans will now have to wait even longer for a decent version to appear in the future.
Posted by Adam Whitehead at 15:52

I think it would be fair to reserve judgement until the show airs, wouldn’t it! So much of the tone of this is damning it before it’s had a chance to show whether it’s good on its own terms or not. There are plenty of adaptions of books that divorce themselves from the original and stand on their own two feet, even get revered. And plenty of slavish adaptions that are dull as dishwater. Why all the hate? And, look, if it does turn out to be something you don’t like, well, the books don’t stop existing...