Rumours are circulating about the next few Star Wars movies, suggesting they will take place in a new historical era known as the "High Republic," set some 400 years before the events of the other movies. 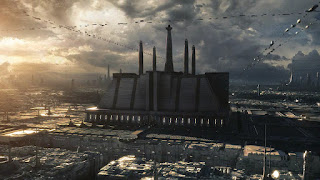 The now-retired Expanded Universe featured other eras of Star Wars history, most notably the "Reformation Era" set about 1,000 years before the films and focusing on the reorganisation of the Republic into its later form and the threat posed by Darth Bane.

Far better-known and more popular is the "Old Republic Era," which is set about 4,000 years before the films and focuses on a series of ancient struggles between the Jedi and the Sith which devastated vast areas of the galaxy. This era was the setting for a very popular comics series and also the best-selling Knights of the Old Republic series of video games. The current Star Wars online RPG, The Old Republic, is still set in this era and its future story direction is being directed by the Lucasfilm Story Group, semi-canonising it under the new Disney regime.

Last year it was reported that Altered Carbon showrunner Laeta Kalogridis was developing a film script based on the original Knights of the Old Republic and that Disney were planning to set all of their currently in-development films post-Rise of Skywalker in this era, including a trilogy spearheaded by Last Jedi director Rian Johnson and a multi-film project led by former Game of Thrones showrunners David Benioff and D.B. Weiss. Benioff and Weiss subsequently walked from the project and the under-performance of recent Star Wars media has left the future of the franchise in the cinema in some doubt.

According to the report, Disney are now most likely to press on with their "Project Luminous" idea, except it won't be set 4,000 years earlier but four hundred years before the existing movies. Reportedly, this project will incorporate the next few feature films, video games, novels and comic books, and will focus on a group of Jedi exploring the Unknown Regions of the galaxy. Exploration and confronting new threats will apparently be a focus, along with a possible confrontation with a group of Sith hiding in remote corners of the galaxy.

The wisdom of abandoning all of the familiar parts of the Star Wars setting, as well as the popular Knights of the Old Republic sub-setting, for a completely fresh time period is questionable. The quality of the project will depend on the creative talent involved, which has yet to be confirmed.

Although it sounds like most or all Star Wars projects in the medium term will focus on this new setting, Lucasfilm will continue to explore more familiar settings through further seasons of The Mandalorian, as well as their up-coming mini-series focusing on Obi-Wan and a prequel spin-off from Rogue One.
Posted by Adam Whitehead at 19:05