The Solar system has been plunged into chaos. A third of the Martian fleet has defected to a new cause, an OPA breakaway faction has committed the greatest terrorist attack in human history and the new colony worlds beyond the gateways are engulfed in strife. It once again falls on the shoulders of Jim Holden and the crew of the Rocinante to help end the crisis. 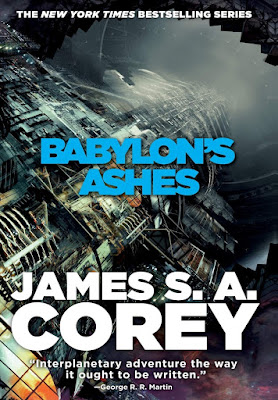 Babylon's Ashes is the sixth novel (of nine) in The Expanse series, but is really the second half of the preceding novel, Nemesis Games, which took the Expanse universe we'd all grown to know and tossed it through a blender. Ashes picks up the wreckage from that book and tries to restore some sense of normalcy to the setting.

The book is huge in scope. In fact, it's the broadest in scale of the series to date, with numerous POV characters in multiple factions, including picking up on various one-off POVs who appeared in earlier novels. Seeing characters like Prax and Anna show up again several volumes after their own storylines apparently ended and lend a hand (or take a view) on what's going on is quite good fun.

However, since Babylon's Ashes is pretty much exactly the same length as the other books in the series, this enlarged scope does mean we get a lot less time with other characters. In fact, the book's pace feels a bit accelerated, as we pin-pong back and forth between a large cast. Having more characters in a standard-sized book means that we spend less time with each character, and the resulting story arcs are much choppier.

It also doesn't help that there is a repetition of structure and plot here. We've seen Jim Holden and the team getting into hijinks with the Nauvoo aka Behemoth aka Medina Station and the "slow zone" previously whilst various other factions shoot at one another and here we are, doing it again.

The Expanse is, at its best, a thrillingly executed political thriller in space, with normally enjoyable adventure elements added. At its worst, the series' workmanlike prose and tight focus can leave it feeling repetitive and a bit MOR as these kind of space operas go. Nemesis Games was probably the best book in the series because it gave readers a "Red Wedding" level of shock, something which overthrew the apple carts and put our heroes on the back foot with a genuinely thrilling sense that anything could happen. Babylon's Ashes wastes that promise by lowballing the damage done from the disaster in the previous novel (the characters are now completely removed from the carnage so it's only related through statistics and people looking glumly at reports on screens), eliminating the over-arcing threat easily with a convenient mcguffin and then establishing a new status quo with almost indecent haste.

That's not to say that Babylon's Ashes is a bad book. Even at its weakest, The Expanse is competent. But there is the prevailing feeling here that the books feel like a first draft with the (decidedly superior) TV adaptation coming in afterwards and rearranging the character and plot elements into something considerably more compelling.

Babylon's Ashes (***) is readable and interesting, but after Nemesis Games it feels decidedly underwhelming, occasionally bordering on the lacklustre. It is available now in the UK and USA.
Posted by Adam Whitehead at 16:40