Whoopi Goldberg is returning to her role of Guinan in Star Trek. 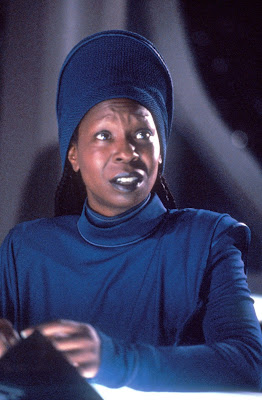 Patrick Stewart made the offer, authorised by his fellow producers, live on TV whilst appearing on Goldberg's talk show, The View, and Goldberg accepted.

Goldberg portrayed the role of enigmatic alien Guinan in a recurring role on Star Trek: The Next Generation between the second and sixth seasons of that show. She served as the bartender and owner of the Ten-Forward bar on the Enterprise. She also appeared in the film Star Trek: Generations (1994) in a major role and in Star Trek: Nemesis (2002) in a minor one. Guinan is a very long-lived alien, a member of a species called the El-Aurians who are also known as "listeners." They have an unusual relationship with the universe and with time itself. At one point Guinan apparently holds off the supposedly infinite power of Q (in the episode Q Who?), whilst in another she is able to perceive a major shift in the timeline when no-one else can (Yesterday's Enterprise).

Goldberg took time out of her burgeoning movie career to appear on Star Trek, because of her lifelong love of the franchise. Movie stars (especially Oscar nominees and winners) appearing on weekly TV was extremely unusual in the 1980s and 1990s and Goldberg's presence increased interest in the series, although her appearances were intermittent (eventually totalling 29 out of The Next Generation's 178 episodes).

Guinan will return in Season 2 of Star Trek: Picard, which is expected to shoot later this year for airing in 2021. Season 1 will begin airing on CBS All Access in the United States tomorrow and on Amazon Prime in the rest of the world on Friday.
Posted by Adam Whitehead at 17:21

Looking forward to this. BTW, In response to your Twitter comment, Star Fleet wasn't trying to relocate every Romulan, only the ones in the blast zone. .