Star Trek: Picard has been renewed for a second season before the first season even airs. 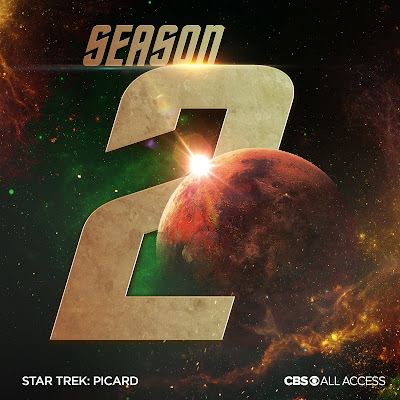 The series sees Sir Patrick Stewart return to his signature role of Captain Jean-Luc Picard from Star Trek: The Next Generation (1987-94) and four feature films. The show has picked up a lot  of positive buzz and executive producer Alex Kurtzman has already met with Stewart to discuss a second season.

The long-term future of the series depends on the willingness of Stewart to carry on, as he turns 80 years old this year. Stewart notes he was convinced to return because he wanted to give the character a better send-off than the disappointing Star Trek: Nemesis (2002) and felt he had unfinished business in the Star Trek universe.

Star Trek: Picard debuts on 23 January on CBS All Access in the United States and worldwide the next day on Amazon Prime.
Posted by Adam Whitehead at 18:33

Honestly im conflicted about this, mostly beceause i like Captain Pickard very much as an icon of leadership but am afraid he will be a watered down new uplifted version. Guess they do trust in the brand if they have given us a season 2 already.