Several years of constant duty has left the independent frigate Rocinante damaged and in severe need of a refit. With the ship in a repair dock for several months of work, the crew scatters back to their homes to catch up with old friends and family. With humanity moving out to explore the new worlds beyond the alien wormhole gateway, it feels like a time of peace and opportunity. This abruptly changes when the largest terrorist attack in human history kills millions and suddenly the Solar system is plunged into chaos. The crew of the Rocinante have to regroup and stop the crisis from getting even worse. 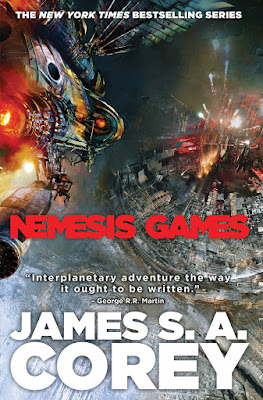 Nemesis Games is the fifth of nine planned books in The Expanse series, carrying us firmly into the second half of the story. Co-authors Daniel Abraham and Ty Franck (writing as James S.A. Corey) have structured this series in a very interesting way, using only Jim Holden as their ongoing POV character and swapping other characters in and out with every passing volume. The story has also evolved in an organic way, moving from a near-future thriller rooted in realism in Leviathan Wakes to much grander stories involving aliens and gateways, as well as frontier colonialism. This approach helps keep things fresh, especially when compared to the numerous military SF series out which go on year after year, getting more stale with each passing volume.

Nemesis Games is different to the preceding books in several ways. First off, it splits the POVs between the four crewmembers of the Rocinante. Holden still present, but Alex, Amos and Naomi now all get their own storylines and perspectives. This is a very welcome and overdue move, especially for Naomi who always clearly had more background and complexity going on than Holden (who is often somewhat dense, it has to be said) was able to discern from her. Focusing on Amos, a deeply violent man who requires external stabilising forces to keep himself from snapping altogether, is also a rewarding move which furthers his character more. Alex is the most straightforward crewmember on the Rocinante and this makes him arguably the least interesting, but Abraham and Franck throw in a crowd-pleasing move by teaming him up with Bobbie Draper, the fan-favourite Martian marine from Caliban's War, for most of his mission.

The rotating chapter structure keeps things ticking along quite nicely and at first it appears that our characters are all involved in completely different events. Links soon appear between them and suddenly everything comes crashing together when the terror attacks take place. This is a game-changing moment in the series when the powers and factions we have gotten used to through four previous volumes are challenged by the arrival of a new, more dangerous force and all the existing rules are thrown out. The abruptness of the catastrophic attack is brutally effective, even if the scale of the conspiracy required to bring it about is at times unconvincing: Abraham and Franck evoke a similar feeling of shock to the events of 9/11 but on a far vaster scale involving thousands of conspirators, but that makes the likelihood of the plan succeeding without being found out rather less likely.

Once chaos has been unleashed the authors slam down the accelerator. Nemesis Games moves rapidly between Alex and Bobbie on a desperate rescue mission to Holden's politicking on Tycho Station to Amos and Clarissa Mao trying to escape from a scene of utter devastation to Naomi reluctantly trapped on the inside of the criminal conspiracy. There's a feeling of doom-laden relentlessness to the book which keeps things moving along quickly. This is also the first time in the series where the authors haven't felt the need to tie up the primary storyline before the end of the novel, as they seem to consider Nemesis Games and the forthcoming sixth volume, Babylon's Ashes, as a duology within the framework of the larger series. The novel ends with the bad guys still at large, the catastrophic aftermath of the attack still unfolding and new threats emerging beyond the wormhole gateways.

There are flaws in all of this: Naomi is captured and spends the bulk of the novel imprisoned and trying to talk her captors down from their villainy. Although the authors change things up by having Naomi's captors being her friends from childhood, it still feels a little too much like a retread of Naomi's story in the previous novel in the series, Cibola Burn. The actual moment of the terror attack also feels a little undercooked, as we move from the villain declaiming that something huge is about to happen to seeing a news report on the aftermath. But the impact on the characters is immense and the way it restructures the story going forwards is quite well-handled. In addition, some readers may be disappointed that there is little to no expansion given for the protomolecule storyline and the mystery of what happened to its creators, but arguably after three books focusing on that to the possible detriment of the human story, that's not too much of a problem.

Nemesis Games (****½) finally fulfils the promise laid down by Leviathan Wakes five years ago and is the best volume in The Expanse to date. The novel is available now in the UK and USA. The next book in the series, Babylon's Ashes, will be published on 2 November 2016.
Posted by Adam Whitehead at 17:34