Revolution has come to Europa. Radicals are urging the oppressed workers, born into clientage to the nobles and mage houses, to rise up and seize control of their own destiny. At the same time the Iberian general Camjiata has returned home, raised an army and invaded the Gallic lands. But these great events are of lesser important to Cat Barahal than finding her husband, Andevai, now a prisoner of her enigmatic father. 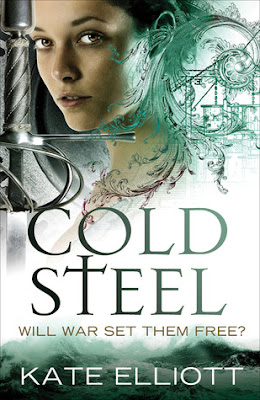 Cold Steel concludes the Spiritwalker Trilogy, Kate Elliott's skillful and intriguing blend of epic fantasy, the Napoleonic Wars, the Industrial Revolution, steampunk and, er, dinopunk, all told as something approaching a Victorian comedy of manners. It's a highly unconventional work from an author constantly seeking out new angles in the fantasy genre.

It's also the best book in the series. The first two novels set up a lot of complicated elements, such as the Wild Hunt, the mage houses, Camjiata, Cat's intricate family backstory, the magical abilities of her cousin Bee and the radicals, but then let them drop into the background in favour of Andevai and Cat's romance. With that now established, these other elements rise to the fore and the story becomes more epic and complete, moving between the difference storylines and characters with greater ease than in the first two novels. It helps that the fire mage James Drake is now promoted from middling annoyance to outright supervillain in this novel, giving Cat and her allies something more tangible to fight against than the mysterious Master of the Wild Hunt and the otherworldly courts he answers to.

The pace is crisp and effective, with the book not getting bogged down in side-elements as occasionally threatened in Cold Fire, and indeed some elements feel a little under-explored given their set-up in earlier novels (most notably the dragons, who get one spectacular scene but otherwise don't play much of a role in affairs). A very minor issue is that the book does become slightly obsessed with Andevai's wardrobe choices to the point of parody (although I suspect this is the point): I could certainly do with never reading the words "dash jacket" in a fantasy novel again.

Beyond that, Elliott fulfils in Cold Steel (****) the promise laid down in the earlier two, delivering a finely characterised, enjoyable and offbeat conclusion to an original and different kind of fantasy trilogy. It's less weighty and intense, and maybe less memorable, than her earlier Crown of Stars and Crossroads series, but it may also be more fun. The book is available now in the UK and USA.
Posted by Adam Whitehead at 11:08