In a surprising move, Lucasfilm has confirmed that Grand Admiral Thrawn will appear in the new Star Wars canon.

Thrawn appeared in the first novel of the Star Wars Expanded Universe, Heir to the Empire (1991) by Timothy Zahn. Thrawn was the primary antagonist of the original Thrawn Trilogy and was praised by fans for being a skillful, cunning strategist who was amoral rather than outright evil and a very different type of villain to Vader or the Emperor. His immense popularity was enhanced by the fact he only appeared in three novels and then died, with Zahn refusing to bring him back (although later books did expand a little on his background and that of his race, the Chiss). The video game TIE Fighter and a few other elements of the Expanded Universe did eventually reveal a little more about Thrawn's backstory.

Thrawn, along with the rest of the Expanded Universe, was wiped from canon in the Great Purge and it was assumed we'd never hear about him again. However, Lucasfilm have now confirmed that you can't keep a good villaint down. Grand Admiral Thrawn will return in a new novel from Zahn, called just Thrawn, which will be published next year. He will also apparently be the primary villain of the third season of Star Wars: Rebels, voiced by Lars Mikkelsen (brother of Star Wars: Rogue One actor Mads Mikkelsen). 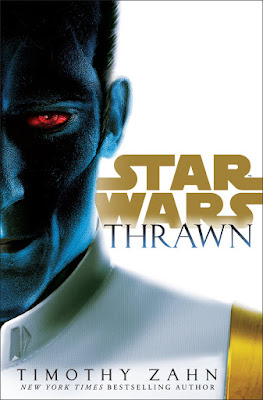 So far only Thrawn's return has been confirmed. The stories he was in remain non-canon and it's unconfirmed if any of his related characters like Mara Jade, Jorus C'boath or, most notably, his trusty sidekick Captain Pellaeon will also appear. However, the image released from Rebels does suggest that the Force-resisting ysalamir may also put in an appearance.

Thrawn is the most popular and iconic Star Wars villain barring only Vader and the Emperor, a remarkable feat for a character who only appeared in supporting material. He is also sometimes credited for the success of the Expanded Universe as a whole. Althought it is a little sad we won't be seeing a live-action Thrawn as a major villain in Episode VIII or IX (as some fans hoped), it will be good to see him back in action. And of course, it does leave the door open for him to appear in other spin-off movies set in earlier time periods.

A commenter on another blog covering this said the lizards in the trailer are not ysalimiri and they're not going to return to canon. The powers-that-be on Rebels just wanted to include a visual tribute. The person sourced this to some kind of panel at Star Wars Celebration.