Aidan Pearce is a hacker whose latest job attracts more attention than he'd like. His car is attacked, his niece is killed in the crossfire and he is left hungry for vengeance. His investigations reveal something dark lurking at the heart of the new computer system which is running the utilities and services of Chicago, and put Pearce on a collision course with both the corrupt administration of the city and some of its most dangerous criminals. 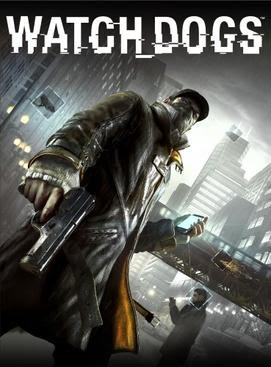 Watch Dogs (aka WATCH_DOGS) is what happens when you create a game not based on its own merits or a killer idea, but by borrowing elements from just about every single other AAA game franchise in existence and throw them all into the blender to see what happens. This is an open world game that borrows - a lot - from Grand Theft Auto V and Assassin's Creed, with a side-dose of Deus Ex: Human Revolution and a mild flavouring of Far Cry. It's a bit of an unholy mess, a game that tries to be a jack of all trades and ends up a master of none. It realises some of its ambitions efficiently (but never outstandingly), but it makes a total hash of others.

The game is a set in a fictional version of Chicago which has been put under the control of a new computer network which you can hack into at will. This allows you to change traffic lights (generating comical car crashes), burst water mains, blow up electrical junctions and detonate sewer mains with a few taps of your phone. You can do this just for a laugh, but you can also use these abilities whilst fleeing from pursuit or trying to infiltrate a building for secrets.

Watch Dogs it at its best during these infiltration missions, with Aidan hiding around the corner and hacking into the building's camera network to see what's going on instead. From the cameras you can lure enemies into traps, shut down communications, remote-detonate explosives carried by guards and so on. When these systems work, the game is absolutely great.

A lot of the time they don't work or are unnecessary. Hacking the cameras to defeat enemies works well, but it also takes time. A laborious thirty minute stealth infiltration can be resolved in two minutes by just having Aidan wade into the place with grenade launchers and machine guns. Aside from one or two missions, there is no penalty for simply wading into a situation and killing everyone in sight. One mission, which sees Aidan ascending a tenement block to hack a crime lord's data files, even has bad guys spawning in areas you've already cleared with the cameras (on occasion you can even spot them materialising out of nowhere, which is shockingly bad game design for a modern, big-budget video game), rendering the whole option pointless.

Combat is okay, if unremarkable, but the game's stealth systems are a dog. Cover is sticky and won't let go of you easily. I died far more often from a grenade landing at my feet and Aidan standing still as I hammered the controls to disengage from cover than I ever did from enemy action. Nonlethal takedowns are an option, but on more than one occasion Aidan pulled out his gun and blew away the bad guy rather than simply knocking him out, automatically failing one mission due to being discovered. There are also bad guys who use power armour (somewhat incongruously with the rest of the contemporary or very-near-future setting) who simply act as tiresome bullet sponges who can't be defeated with takedowns until you unlock a late-game skill at which point they become easily disposable.

The open world basics are a mixed bag. There are data towers in parts of the city which you can hack into to discover the locations of side-missions (just like Assassin's Creed and the more recent Far Cry titles) and there's a lot of nice urban detail to the game. One of the big selling points of the game is that you can tap into anyone's mobile phone nearby and learn more about them, perhaps being able to read their texts, listen in on their calls or hacking their bank accounts. Although clearly these elements are randomly assigned from a massive database of descriptions, it still gives the civilian population more character than in, say, a GTA title. Vehicle handling in the game is atrocious: apart from the very fastest sports cars, vehicles handle likes cement blocks on wheels. Bikes are a bit better but in the end I preferred travelling by speedboat (fortunately the map design means most objectives can be reached pretty easily from the river, canals or lake) simply because they had fast turning circles and I wouldn't kill passers-by whilst simply trying to stay on the road.

The storyline - the reason for doing all this running around - is unfortunately insipid, predictable and tiresome. Aidan Pearce is a complete non-entity as a character, a guy with a gravelly voice who wants to be Batman (but a Zach Snyder Batman who is happy murdering people as long as they are bad or it can be self-justified) and wants to avenge his niece's death, but seems rather ludicrously un-self-aware of the mayhem he continues to unleash on his family. Occasional moments when Pearce feels guilt over murdering everyone in sight to achieve an objective ring hollow, since nothing stops him doing the exact same thing on the next mission. Pearce builds up a network of allies and friends over the course of the game, from friendly gangster (and constant scene-stealer) Jordi Chin to French hacker Clara to legendary data ninja T-Bone, but we're never really given a good reason why any of these people want to help an uncharismatic, selfish bore with fluid morality like Aidan.

Despite these criticisms I had some fun with Watch Dogs. The environmental detail is quite impressive, the graphics are effective (if not outstanding) and the sense of place is unusual. The game gave me a bizarre sense of deja vu when travelling the freeways around Chicago from my own visit to the city. It can also be fun to cause havoc in the city, playing with traffic lights, shutting down trains and blowing up cars with sewer pipes. The typical open world problems remain - 99% of buildings cannot be entered and the police won't bother to investigate the two dozen murders you just committed as long as you stay out of their sight for two minutes - but the city feels a bit more alive than in most other open world games. The environmental puzzles can also be a lot of fun. But the game is also deeply flawed, especially in comparison to the competition: Grand Theft Auto V has much more interesting characters and is far better-realised open world with much better vehicles. The new Deus Ex games do hacking and cyberpunk far better. Far Cry 3 and 4 are a much better open-world combat games. And almost any modern action game has stealth and cover systems that make Watch Dogs look inept by comparison. If you're looking for an open-world city game that isn't a GTA title, I would recommend Sleeping Dogs much more strongly over Watch Dogs, as that game has a strong storyline and its unique selling point - martial arts - is handled much better than Watch Dogs' hacking elements.

Ultimately Watch Dogs (**½) feels like a game that needed a good six months more development to iron out the bugs and make the systems work more efficiently together. If Ubisoft can overcome these problems and employ better stealth and vehicles, than the forthcoming Watch Dogs 2 may be a much stronger game.
Posted by Adam Whitehead at 15:17