A routine case turns up at Valentine's Detective Agency: a young girl has run away from her family, and they want to track her down. The Sole Survivor and Nick Valentine soon discover that the girl has fled to Far Habor, an island located to the north-east of the Commonwealth. Following in her tracks, they find a community fiercely distrustful of outsiders and divided into three camps: the town of Far Harbour itself, the nuke-worshipping cult known as the Children of the Atom and a band of runaway synths dwelling in the scientific outpost of Arcadia. Tensions are rising between the three groups, which is dangerous when one controls a band of powerful robots that can look human and another has access to nuclear weapons. You have to choose which faction to support, or if there is a way to continue the peace and allow the three sides to exist in harmony. 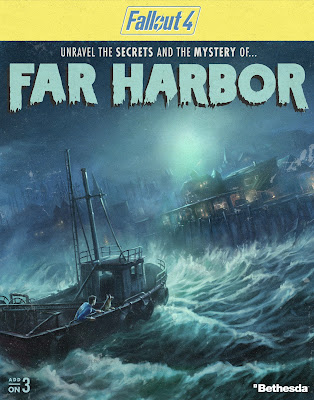 Bethesda RPGs are such gargantuam, time-destroying games (each easily allowing for over 100 hours of gameplay) that the notion of making them even bigger has always seemed a bit redundant. This is especially the case if you've already completed the base game and are entering the expansions as an all-powerful, high-level demigod of destruction. Bethesda's response in the past has been to go completely nuts in originality and experimentation, with their expansions usually being wilder, better-written and more thoughtful than their base games. The Shivering Isles was a huge improvement over the blander Oblivion, Fallout 3's five mini-expansions were much better than the original game (and fixed its truly appalling original ending) and Dragonborn was an excellent mash-up of Skyrim's arctic stylings with the weirdness of Morrowind (arguably, still Bethesda's finest hour). But the highlight of the Bethesda expansion track record (maybe somewhat embarrassingly, as Obsidian actually made them) is easily New Vegas: not only was the base game the most thoughtful, interesting and well-judged of their big RPGs, but its four expansions together made for a fascinating thematic exploration of the philosophy of RPGs whilst also being extremely funny and wildly varying in tone and atmosphere.

Far Harbor isn't competing remotely on the same level as Obsidian's material, but it's more surprising that it also fails to live up to Bethesda's own past achievements. Bethesda have boasted that it's their biggest expansion to date, and that the world map (based on the real island of Bar Harbor, Maine) is the largest they've created for an expansion (if so, it's not by much). However, in terms of locations to visit on that map and the amount of stuff to do it feels slight compared to Dragonborn or Shivering Isles. In terms of the time I spent playing it, it evened out at around 15 hours, which is less than even Old World Blues or Point Lookout, supposed mini-expansions for Fallout: New Vegas and Fallout 3 respectively. 15 hours of gameplay is nothing to be sneezed at, but considering that some people have put literally hundreds of hours into Fallout 4 itself it's also not going to be presenting players with a huge challenge.

The game is designed around its three factions and their bases: the human settlement of Far Harbor, the synth base of Arcadia (built in an old observatory) and the Children of the Atom's stronghold of Nucleus, an old nuclear submarine base. In each location you have multiple characters to meet and befriend and a lot of quests to do to build up your reputation with each faction. Ultimately you have to decide on the fate of each faction and the entire island: it is possible to wipe out the entire population of the island if you really want and it's also possible to forge a new peace between the three sides. You can also, laudably, create a messier halfway-house stopgap solution which leaves one or more factions destroyed and the rest angry with you for messing everything up. 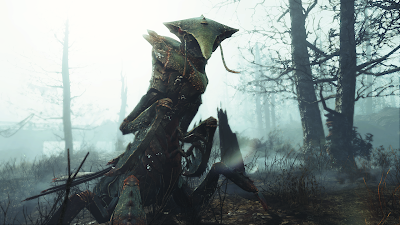 That's all fine, but surprisingly short and unchallenging. A lot of the quests for each faction fall back on Fallout 4's biggest weakness, its frustrating and dull overreliance on combat. The Fallout series was, once upon a time, the most roleplaying-intensive of all game series, giving you amazing freedom to complete quests through dialogue, wits, cunning, stealth or combat. Fallout 4 has very little truck with allowing you to solve problems through anything other than bloodletting. Far Harbor does allow you some leeway in how to solve the over-arcing storyling peacefully, but most of the individual quests you do along the way involve having to blast your way to a solution. It's an annoying tendency which is often at odds with the expansion's thematic musings on diplomacy, consequences and regrets for past actions (hint: make sure you take Nick Valentine as your companion, as the game expands a lot on his backstory). If you're coming into this expansion having completed the main game and in the Level 40s or 50s, you'll also find it a complete and total cakewalk (a couple of the tougher robots below Arcadia possibly excepted).

On the plus side, the shorter game length and smaller geographic size of the game allows for a tighter focus on the characters, and there seemed to be more memorable characters with better dialogue than the base game. This comes to life in the game's highlight, a dramatic showdown between the leaders of Arcadia and Far Harbor where your past actions in helping or hindering both sides come dramatically into play (slightly frustratingly, this scene only plays if you've already given up on the "best possible" ending, but then there is a consequence for such things).


Another initial highlight is a side-quest called "Brain Dead", which takes you into a vault populated entirely by robots. A murder has taken place, which quickly turns into a Agatha Christie-style mystery. With robots. This was actually original, zany, well-written and funny, the sort of thing Bethesda used to be really good at. Unfortunately, this quest was quite blatantly "borrowed" from a New Vegas fan mod called Autumn Leaves, which Bethesda apparently have not credited to the original creator, which is definitely not a cool thing.

Overall, Far Harbor (***½) isn't terrible. It's fun, it passes away a few hours and it has some strengths in character and moral decision making that are better than the original game. But it's also lacking in original content and is much slighter than Bethesda made out it as going to be. As possibly the only major, story-focused expansion for Fallout 4 we'll get (the rest have all been cosmetic twinges to the settlement system and allowing you to build new robots), it's severely underwhelming. I would only recommend this at full price to hardcore Fallout 4 fans, and would advise that everyone else wait for the complete Ultimate Edition or for the expansion to be heavily discounted.
Posted by Adam Whitehead at 23:26