Ghosts are rising across New York City, summoned by an unknown force. Four paranormal investigators have to stop them with advanced and unsafe nuclear technology before really bad things happen. You know the drill. 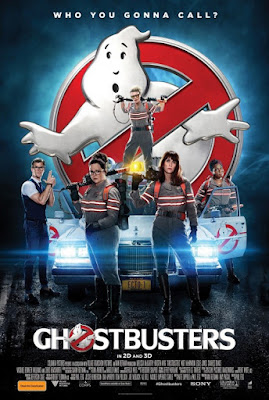 Remakes and reboots are a controversial topic, particularly when it's of a beloved and iconic franchise. Ghostbusters, released in 1984, was groundbreaking in its special effects but what really sold the movie was the improvisational humour of Bill Murray and excellent judgement of tone, in which a generally serious situation (an evil demon prepares to arise in the city, sending two minions to pave the way) was reacted to with what can only be called the sheer apathetic, sarcastic attitude that only New Yorkers can fully employ. Throw in some astonishingly memorable one-liners and a warm-hearted camraderie between its leads (borne from years of working together on sketch shows and other movies) and you have an all-time modern classic.

Then, five years later, the exact same gang got back together and delivered the underwhelming Ghostbusters 2, which, a few solid scenes aside, threw away a lot of the lessons learned from the first film and killed the franchise (which had expanded to an excellent animated series and a pretty solid comic book) stone dead.

Twenty-seven years have passed since then - more time than between the Cuban Missile Crisis and Ghostbusters 2 - so the time is certainly ripe for a remake of the original movie. Normally I'm against remakes if there is a way instead of doing a continuation, even through a soft reboot, but in this case it's justified. If New York had suffered two massive, public invasions of the paranormal, then it'd be harder to sell the tension and scepticism that is a core part of a Ghostbusters movie, not to mention the problematic division of duties between the old castmembers everyone wants to see in action and the new, inevitably younger characters who will have to handle the franchise in the future.

As remakes go, this is a pretty decent one. It learns from the original film that New York is as much of a character as any of the actual Ghostbusters and if it doesn't quite judge the tone as well as the first movie, it makes a pretty decent fist of it. The four actresses deliver solid comic performances, although their dramatic chops are more variable (Melissa McCartney, perhaps unexpectedly, is possibly the best performer in the more serious moments of the film, although Kristen Wiig isn't far off). However, it's Kate McKinnon as eccentric engineer/inventor Jillian Holtzmann who steals every scene she's in and gets the best action moment in the whole movie. More of her in the sequel please. 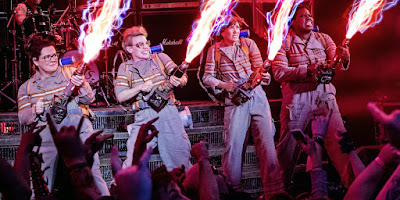 There's a host of great side-performances from the likes of Andy Garcia, Charles Dance, MK Williams and Matt Walsh (catnip for everyone who's ever written fanfic where Omar from The Wire and Mike from Veep team up against a world-threatening danger...that's just me then?) and, as you'd expect from a film made in 2016, the effects are pretty great, if used to overload in the grand finale. There's also well-judged cameos from the entire primary cast of the original film (the retired Rick Moranis and late Harold Ramis excepted), and I'd like to see more of Sigourney Weaver's new character because 1) she's Sigourney Weaver and 2) she's Holtzmann's mentor. I mean, don't wait for the sequel, just give us a Weaver-and-McKinnon spin-off (kinn-off?). That'd be just fine.

There are negatives: for every two jokes that work there's one that doesn't, the running gag of sexually objectifying Chis Hemsworth to a degree that'd be creepy if it was a female character (and that thus being the point) is amusing for the first half of the film and then runs out of the steam in the second, the villain is pretty much a complete non-entity and there's much less of an attempt to justify how the the hell the Ghostbusters pay for everything (the first film spending so much time on something pedantic resulted in some hilarious gags). There's also that odd thing of establishing that the villain has an amazing power which should win him the movie instantly (he can mind-control an entire crowd of people) but then he forgets to use it on the heroes, allowing them to defeat him. But given how horrendously bad this could have been, it's actually a pretty fun picture.

Ghostbusters (2016) (****) certainly isn't as good a film as the 1984 original, but it's not as far off as you'd expect. There's good chemistry between the leads, most of the jokes work and at under two hours the movie doesn't outstay it's welcome as some recent effects films have. There's also a break-out performance from McKinnon and the establishing of a new paradigm (the Ghostbusters getting secret government backing and funding) that could drive quite a few future installments of the series. The movie is on general release right now worldwide.
Posted by Adam Whitehead at 21:31

Nice review. I completely agree about Kate McKinnon - she was fantastic in this.