Sarah Manning and her clone-sisters have defeated the threat of an illegal attempt to create an army of cloned soldiers, and it seems like maybe they might be able to get back to their lives. But the Neolutionists, who want to expand genetic engineering far beyond mere cloning, have other plans. Sarah and her friends, aided by an enigmatic newcomer known as "MK", are threatened by different factions within the Neolutionist movement and have to face the possibility of making a deal with the devil just to survive. 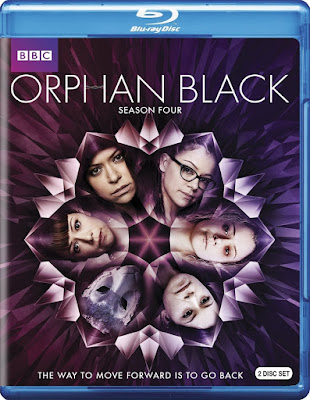 The first three seasons of Orphan Black were excellent, with the writers showing unusual self-awareness by slimming down a potentially confusing morass of subplots and factions in the third season to a much more straightforward conflict. The fourth season sees this conflict resolved and a whole new storyline begun, but one very much rooted in what came before. The Neolutionists, an opposing faction established in the first season but soon superseded by other groups, return to prominence and the show goes back into its roots by exploring the character of Beth Childs in greater depth. This is also gives supporting characters like Art (who was a little lost in the third season) more to do.

This results in some focused, dramatically-accomplished storytelling. One episode focuses almost entirely on Beth's life as she discovered she was a clone, meeting Allison and Cosima and then the shadowy MK, with events building to the tragic and inevitable end we are already aware of from the opening seconds of the whole series. Tatiana Maslany is so great in her multiple roles that it feels like we've gone beyond redundant in mentioning it, but she somehow manages to up her game even further in the fourth season with both her portrayal of the doomed Beth and also in the present day, particularly her performance as Cosmia where she adds more nuance, depth and tragedy than ever before.

The fourth season risks getting heavy at times, so as usual relies on the screamingly dysfunctional (and dystopian) domestic adventures of Allison and Donnie Hendricks to draw things back in with jet-black humour. This season they also do a great job of involving Allison and Donnie more in the main storylines (in Season 3 it felt like they were making their own spin-off in the context of the larger show) and tonally varying things up a bit to make things more interesting. Donnie and Felix posing as a gay couple looking to have a baby might be the funniest storyline the show has ever done, especially as Felix reels in Donnie's stereotypical performance. Felix, who also got a little lost in the mix in Season 3, gets more to do this year as he embarks on his own quest to find his biological family. We get a lot more insight and empathy into the "villains" of the show this year as well.

Season 4 doesn't really falter at all, although some fans will bemoan a distinct lack of screen-time for Helena (although when she does return, she makes it felt in her own inimitable style) and the total absence of Cal (Michael Huisman possibly busy filming Game of Thrones). Particularly brilliant is the ending, which sets us up with a new villain who is actually an old one: Orphan Black and Game of Thrones have both realised that there is nothing more satisfying than having your ultimate main bad guy as someone you've gotten to know already over multiple years and set up accordingly. Things are set up for what will hopefully be an exhilarating showdown in the final season next year.

Orphan Black's fourth season (*****) sees the show somehow get even better than it was previously. Even in a golden age of television, it is entirely possible that this little SF show from Canada might be the very best thing on TV at the moment. The show is available now on Blu-Ray and DVD in the USA, with a UK release to follow in a few months. It is available now on Netflix in the United Kingdom and Ireland.
Posted by Adam Whitehead at 11:08

I thought that was wrong when I was writing it, but forgot to double check. Fixed, cheers.

I disagree. I thought Season 4 was the weakest of the series so far. I think the writers were more into setting things up for the final season than anything else. Hopefully, all the setup means the final season will be great.

Hate to be "that guy", but the clone MK's accent didn't sound even remotely Finnish. Also, her surname (Suominen) is ridiculous, since it basically means "Finnish-person". In other words, the name is so obviously made-up, it borders on being offensive. Also, her nickname, for some reason is "Mika", which is an exclusively male Finnish given name. Might as well call the clone "Edvin" or "Artturi". Tatiana Maslany has also mentioned researching Björk for this role. Why Björk? I really do hope she does realize that Björk is from Iceland, not Finland...

But, to give credit where credit is due, they did get a few details right. The newspaper clippings that M.K. carried with her, for example, were all in actual Finnish and did actually say the things referenced in the plot. So kudos for that.

Actually "Suominen" is a very common surname in Finland, every 800th finn has this surname, there are dozens of people named "Veera Suominen" in Finaland so not so obviously made up. Also the MK -name came from her clone code and "Mika" is what it sounds if you make the sounds "m" and "k", so I think it's just a version of the m.k. that's fits better in your mouth.

The accent was nothing like finnish though, it was even described as "scandinavian" in the series which was odd, since Finland isn't even considered part of it here and finnish belongs to a totally different language group...