The moonshadow elf assassin Rayla has formed an unlikely alliance with Ezran and Callum, the princes of Katolis. Their mission is to take the newly-hatched Dragon Prince back home to Xadia and end the brewing war between the human and elven kingdoms, facing opposition along the way. But first they have to make their way out of Katolis and find a way of crossing the river of lava that separates the nations. 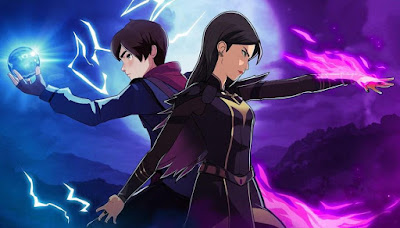 The first season of The Dragon Prince was highly enjoyable but let down by technical issues, particularly the decision to drop the frame rate for certain scenes to keep the budget down. Fortunately this problem has been fixed for the second season, where the animation is stronger and more fluid. More importantly, the shows steps up a gear with its story and characters.

The series continues to mainly be a road trip, as Team Kayla makes its way to the border. They encounter new friends and allies along the way, along with old "enemies". The best thing about The Dragon Prince continues to be the character depth. The "good guys" make questionable and difficult decisions that sometimes backfire, and the "bad guys" (who don't consider themselves to be the bad guys) have their own, often credible motivations for what they are doing. Viren is certainly the show's antagonist, but he comes across as more ruthless than actually evil, and several times seems to retreat from doing things that would cause too much harm. Viren has a low-key but fascinating storyline in which he makes contact with an elf magician named Aaravos to learn more about magic, and it becomes clear that Aaravos may be a far more dangerous figure.

This season also relaxes its attention from the Callum and Rayla relationship to focus a lot more on Ezran, who now has responsibilities after the dragon hatchling "Zym" bonds with him. Ezran's journey from a young carefree boy to a more serious prince is handled quite well, in a relaxed manner. Callum has his own journey as he tries to find a way of mastering magic without a Primal Stone, something that is supposedly impossible for a human. Of the prominent Season 1 regulars, only Rayla feels a little lost in the mix, with less to do. I must also admit to some disappointment that the entertaining duo of Ellis and Ava the three-legged wolf fail to join the heroes on their quest, although they do have some prominent moments in the opening episodes. 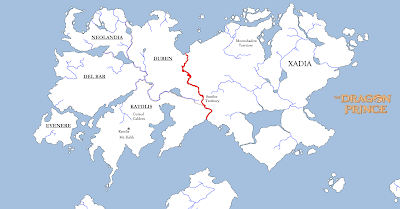 There is also a tremendous improvement in the worldbuilding, with the other four human kingdoms named and explored (if only lightly at this stage) and more varieties of elf appearing, such as the formidable sunfire elves who can turn into powerful lava monsters.

With the technical problems solved, the world being fleshed out more and the narrative being more interesting, The Dragon Prince levels up in its second season (****) to become an even stronger series. It continues to feel like the seasons are a little too short at nine episodes apiece, but on the flipside the producers are making the episodes relatively quickly, with at least two seasons projected to come out every year. The series is available now on Netflix.
Posted by Adam Whitehead at 11:09