The Great Marvel Rewatch: Ant-Man and the Wasp

Scott Lang is under house arrest for violating the Sokovia Accords and helping Captain America out in his struggle with Iron Man (in Captain America: Civil War). With only three days left before freedom, the last thing Scott needs is to be roped back into the machinations of Hank Pym. Which of course is exactly what happens. Hank and his daughter Hope are on the verge of locating Hope's mother Janet, lost thirty years ago in the Quantum Realm, but they need Scott's help to complete the mission. 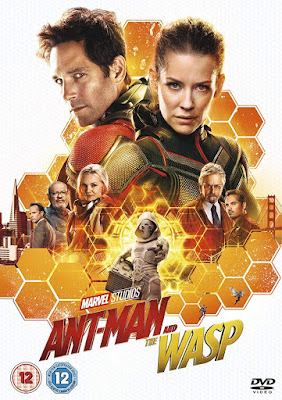 The original Ant-Man was a solid movie let down by an underwhelming villain (a perennial Marvel problem) and the fact that it had too many hands involved in its creation, resulting in the story losing focus. Long-term Marvel fans were also not keen on the relatively minor character of Ant-Man being elevated above the more traditional Avengers member of the Wasp in story importance. The sequel sets out to rectify these problems and (mostly) succeeds, resulting in a stronger, more assured picture.

The film is less dependent on Paul Rudd as Scott Lang, although he continues to provide an excellent performance balancing comedy and pathos. Evangeline Lilly has a lot more to do as Hope van Dyne, now officially the Wasp with her own costume and plenty of stunts and fight scenes. Michael Douglas also seems to be having a great time as the irascible Hank Pym, with more of an irritated comedic aspect visible in his dealings with Lang, but also genuine emotion as he struggles to find his missing wife (a brief but effective appearance by Michelle Pfeiffer, complete with some de-ageing CGI to scenes set in the 1980s).

The incongruous "evil mad villain who kills people" aspect of Ant-Man is something that we desperately didn't need to revisit, so pleasingly the antagonists of the sequel are either more comedic bumblers or, in the case of Ghost (Killjoys' Hannah John-Kamen), a more multi-faceted and complex antagonist whose motivations are pretty easy to relate to but difficult to fully reason with. It's also good to see Laurence Fishburne show up in the MCU. The movie also features a real Marvel Comics deep dive by bringing in FBI Agent Jimmy Wood (a light-hearted performance by Randall Park), who appeared in comics in the 1950s before the modern Marvel as we know it was even founded.

As the movie that followed up the extremely intense Infinity War in the MCU timeline, Ant-Man and the Wasp is mostly here to have a good time, so the darker elements of its forebears are dropped. The result is, perhaps moreso even than Thor: Ragnarok (which did have some real darkness to balance the technicolor laughs), the film that comes closest in the series to being an outright comedy movie. This works quite well, with excellent sight gags and more ways to wring humour out of making things very big or very small than you'd think is remotely possible.

Ant-Man and the Wasp (****) is a fun, not-taking-itself too seriously film which reunites the cast of the original film, gives them more to do and doe some light setting-up for future movies without ever getting too bloated. It's not the weightiest or most memorable film in the Marvel Cinematic Universe, but it does improve on its forebear to become a more interesting film.
Posted by Adam Whitehead at 15:25