The Infinity Stones have wreaked tremendous devastation across the universe, leaving the survivors reeling. The remaining Avengers and their allies from across the cosmos gather together on Earth for one last, possible plan to stop what has happened, at the risk of losing everything that survived. 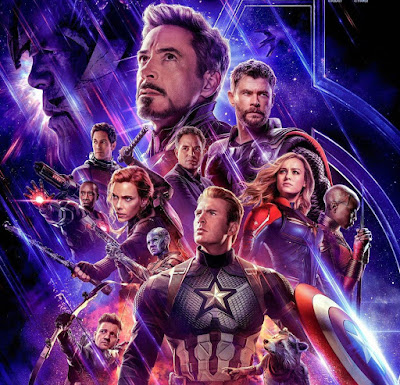 Fifteen years ago, we experienced a genuine cinematic Moment when Peter Jackson delivered the thunderous conclusion to his Lord of the Rings movie trilogy. He wrapped up an emotional, impactful and epic story in a manner that was (mostly) successful and resulted in huge numbers of people visiting the cinema multiple times to see the conclusion to an entire multi-movie arc. I doubted we would see anything like it again, but a decade and a half later we are here with Endgame, a movie that tries something even more stupendous: paying off not just three but twenty-two movies that have been building things up and leading to this moment. The hype is crazy and if anything greater than that for The Return of the King (where you could go and read the story summary online from the book any time you wanted).

Endgame, surprisingly, delivers a nuanced and tight finale to the story that began in last year's Infinity War. Infinity War was epic and impressive, a stunning sequence of epic battles and quieter character moments that came together in several confrontations with Thanos, which Thanos won (although not without cost). Endgame picks up on the aftermath of that event with the surviving heroes regrouping, but they are caught up in grief and loss. Returning heroes Scott Lang and Hawkeye rejoin the team, whilst Rocket, Nebula and Captain Marvel join the Avengers to help resolve the crisis, but their early efforts have mixed results.

Endgame's generous three-hour running time allows directors the Russo Brothers (who can now write their own meal ticket and direct whatever film they want, ever) and writers Christopher Markus and Stephen McFeely to have their cake and eat it, with huge, thunderous battle sequences and lots of quieter character beats. In fact, much of the first third of the film is taken up by people processing the events of the end of Infinity War, and how you move on when half of the people you've ever met are gone. The rest of the film is taken up by our heroes embarking on A Plan to save everyone, which near-instantly goes horrendously wrong and results in lots of the action, comedy and dramatic beats that you've come to expect from a Marvel movie, but more surprising is the amount of emotion on display. Character after character has to face up to their growth and what they've gone through to reach this point, and how they handle key moments that lead to victory, or in a few cases, their death.

Events culminate in a finale that is jaw-dropping in its scale and features some of the best, punch-the-air moments you've ever seen in a superhero movie, as well as moments of real reversals and pain. The directors walk a tightrope between being self-indulgent (the film may rival Return of the King for the number of endings it has, although I think it sells it much better) and too dark, and manages to chart a difficult course through that. It even manages to use Captain Marvel well, acknowledging her sheer power and her use as an asset against Thanos but not allowing her to dominate proceedings to the detriment of the characters we've spent eleven years with.

There's a lot of movie here and it's almost entirely brilliantly-handled. What's more surprising is the sheer degree of payoff we get in this film, and how many near-obscure characters from older movies suddenly and unexpectedly show up and play vital roles (bar one case where rather obviously the actor involved didn't want to return and they had to film around it using older footage, although it kind of works). Fans of the Marvel TV shows will also get one genuine moment of delight in a scene which seemingly officially canonises at least one of the Marvel TV shows as taking place in the Marvel cinematic universe after all. There's also the film's possibly most epic shot which was foreshadowed by a single moment (not even a scene) in an earlier movie from years ago which you could have missed by just looking at your phone for a second. Another major plot revelation hinges on a line of dialogue from another, even earlier movie which makes you suspect the Russo Brothers and Kevin Feige are genuine, outright geniuses.

Problems are mostly non-existent. This is a movie which, as I think everyone has guessed, does lean into a bit of time travel and as a result viewers can have exciting conversations over whether the story completely makes sense as a result (which Ant-Man and War Machine themselves get into a knot over at one point, trying to work out if the plot of the Back to the Future trilogy makes sense whilst Banner gets frustrated at them talking about movies rather than the science). Beyond that, for the first time, a Marvel movie hits every single beat it means to, with a fantastic villain, excellent characterisation and some titanic character payoffs, some you've been waiting a decade for. The only other criticism that could be made is that the film doesn't even remotely stand alone, at all, but then that's kind of the point of it. This is an ending to a very long chapter, and I can't even work out what happens next.

The Avengers: Endgame (*****) is long, but feels short when you watch it. Every character gets their moment in the sun, and the creators somehow make 21 previous movies worth of foreshadowing and backstory pay off in a real, meaningful way through a story that is by turns tragic, epic, moving, funny and action-packed.
Posted by Adam Whitehead at 17:06

So many riddles in this article. I know you want to keep it spoiler free, but i would like to read what you mean by "one genuine moment of delight in a scene which seemingly officially canonises at least one of the Marvel TV shows" or "There's also the film's possibly most epic shot which was foreshadowed by a single moment .." etc. Please keep a spoiler warning at the start and write freely.

I'm ready watch this movie this week. Hope get fun~

what were the two moments you refer to? (the moment and the callback to a Marvel TV show)

I saw it last night and I'm trying to recall those.

Excellent review! You gonna write up a spoiler filled one later?

what Marvel TV show? I must have missed it. It was a great movie but there was so much going on I knew some of it was going over my head. Please elaborate. Also that movie was so long I missed what ever extra stuff happened end credits cuz I had to run to the bathroom

only one problem, THEY MADE POOR THOR INTO A HIPPY DRUID!!!!, DAMN

I will bite. Can you shed light into these?

a) There's also the film's possibly most epic shot which was foreshadowed by a single moment (not even a scene) in an earlier movie from years ago
b) Another major plot revelation hinges on a line of dialogue from another, even earlier movie.

is a) related to the device that Cap lifts?

a) is a reference to the party scene in Age of Ultron where everyone tries to lift the hammer (and apparently fails).

b) The Winter Soldier, the Peggy Carter interview from 1953: "He's how I met my husband."

The Marvel TV show was AGENT CARTER, which was brought into canon by having Jarvis (played by the same actor from the TV show) show up in the 1970 scenes in the movie. Apparently they also talked about the Defenders, but felt that would be too much (in retrospect it was also a good idea not to, especially if they are thinking about bringing them back in a different form in the movies or on Disney+).