The Great Marvel Rewatch: The Avengers - Age of Ultron

The Avengers have brought down and destroyed the last HYDRA cells which survived the collapse of SHIELD. However, Tony Stark is concerned that the focus on HYDRA has made the Avengers - and the world - forget about the threat from alien forces that resulted in the Battle of New York. His new plan is to create a powerful AI and an automated army of soldiers capable of destroying any threat before it gets close to Earth. Things go wrong when Stark puts his plan into operation, and soon the Avengers have to take on a new threat...one of their own making. 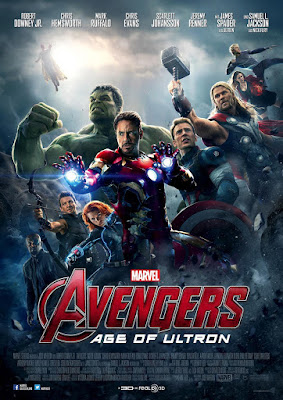 Age of Ultron is the second Avengers movie and the eleventh film in the Marvel Cinematic Universe, making it also (at this time of writing) the film that marks the halfway point of the MCU. On release the film was a huge commercial hit (but not as big as The Avengers) but garnered a mixed critical reception.

The reasons for this are clear. Age of Ultron is a tentpole Avengers movie with all the previously-established heroes (Iron Man, Thor, Captain America, the Hulk, Hawkeye and Black Widow, as well as War Machine and Falcon) back to kick butt again. This second film also introduces several new characters, most notably Vision, Quicksilver and Scarlet Witch, as well as the titular Ultron. This kind of integration of old and new characters is something the MCU is quite good at these days, but way back when Age of Ultron was made (er, four years ago), it wasn't quite as sleek and efficient as it is now. The result is a movie with rocky pacing which sometimes loses focus on what story it's supposed to be telling.

We know now, thanks to director Joss Whedon's candour, that the movie had a lot of behind-the-scenes interference from the studio. In particular, the studio wanted more action and all but demanded that Whedon cut out character-based scenes (such as the sojourn at Hawkeye's farm), whilst they also insisted on shoehorning in more scenes teasing upcoming films rather than retaining focus on the movie at hand. Whedon was also unhappy with the introduction of the "new Avengers" at the end of the film, thinking they lacked bite, and wanted to add Captain Marvel and Spider-Man to the roster at the end of the film. The latter plan was shot down as Captain Marvel hadn't been cast (and her solo movie ended up being delayed by a couple more years) and the Marvel/Sony legal team-up hadn't yet been completed, meaning that Spider-Man was off the menu.

These issues become apparent in the finished film, where there's a lot going on but most of it feels inconsequential. Whedon is also less adept at juggling the large cast this time around, and in fact seemingly checks out of trying to service the cast: War Machine and Falcon get almost no material of consequence, and it feels like Maria Hill and Nick Fury show up only out of a contractual obligation to the actors. Vision is splendidly played by Paul Bettany (who'd already been playing the voice of JARVIS since the original Iron Man) but again it feels like there's barely any room for him, so his importance to the plot feels a bit murky beyond his tie-in with the Infinity Stones.

Also, the Underwhelming Marvel Villain problem strikes again. Ultron is given a great vocal performance by James Spader and has some good lines, but mostly he feels like a generic robot bad guy with a very forgettable look (somewhere between a knock-off Terminator and a lesser Michael Bay Transformer). Ultron's plan to destroy the world at the end of the movie also feels bizarrely random.

Still, there's a fair amount to praise. The actors all bring their A-game and it's fun to see them doing their thing. There's a nice feeling of continuity with Captain America: The Winter Soldier, with the Avengers joining forces to spend a year non-stop wiping out HYDRA after the events of that movie. The new additions to the cast are mostly great and there's some good, fun action scenes and set pieces.

The biggest problem with The Avengers: Age of Ultron (***½) is how incidental the whole thing feels. This is supposed to be the Avengers, up against the biggest bad guys in the universe, not taking on yet another take on "evil AI" in a battle that never feels as high-stakes as it is supposed to be. The end result is a movie that's certainly watchable and at times fun, but also feels kind of unnecessary, especially given the much higher quality of the movies that came out around it (The Winter Soldier and Guardians of the Galaxy just before and Ant-Man and Civil War just after).
Posted by Adam Whitehead at 20:36

"The opening battle in S There's a nice feeling of continuity with Captain America: The Winter Soldier..."