Arthur and his blue companion, the Tick, have saved the world and now everyone wants a piece of them...including AEGIS, the government's superhero registration and organisation agency. With Arthur following his dream of joining AEGIS and the reconstituted Flag Five, the city faces a new crime spree spearheaded by a giant lobster bank robber. At the same time, Superian is having a destructive crisis of confidence and Overkill is struggling with his promise to the Tick to not kill people. 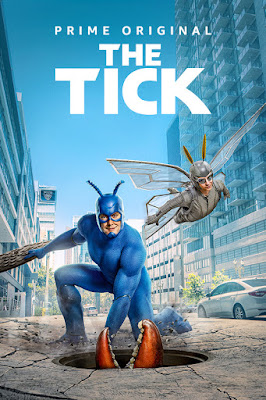 The first season of Amazon's The Tick, the latest incarnation of Ben Edlund's satirical comic book hero, was excellent, a light-and-good-hearted romp featuring bold heroes taking on charismatic but evil villains with wits and next-level dialogue. If the first season had a weakness, it was taking maybe a little too long (about three episodes) to find its feet and not quite sure where to land the tone in the opening instalments. The second it realised the best way to proceed was becoming a live-action cartoon, it took off and never looked back.

The second season is simply better, on every level. The story is bigger and more epic. The new villains are charismatic and exciting. The new allies are colourful and memorable. The dialogue sparkles even more. The pacing (over 10 episodes this time rather than 12) is faster and leaner. The character interaction is great fun, with the writers identifying some interesting character pairings from the first season and exploring them more. For example, Overkill and Dot team up for most of the season, becoming a fine team and also furthering their romantic tension.

I was disappointed to hear that primary villain The Terror ("Alexa! Play sinister music!") and sentient dog Midnight ("I'm just a simple plain-talking German Shepherd who can start fires with his mind, but it humbles me to know that so many good people, like yourself, find meaning in my secular ﻿journey,") would not be returning for Season 2, but to be honest I barely noticed they were gone. New regular characters like Edgelord (a Kylo Ren wannabe who is also a master of social media) and Sage (a Dr. Strange-like character whose powers are derived from his mystical third nipple) fill the void more than adequately. It's a tribute to the show's writing that some of the best character development is reserved for a bank-robbing giant lobster the media dubs "Lobstercules" (a name everyone agrees doesn't work, but leans into anyway), who has a stronger arc and more depth than you'd expect for a character who is quite literally a giant, walking lobster.

In this sense, Season 2 abandons the first season's lingering reservations about being a live-action cartoon series. The Tick not only embraces its absurdity this season, it takes it out for drinks, a spell at the karaoke bar and a curry on the way home. Weaknesses are almost impossible to find: the Tick himself (played as phenomenally well as ever by the mighty Peter Serafinowicz) feels a little too passive in the back half of the series, perhaps, and Superian's story arc feels a little underdeveloped, perhaps as it may be more scene-setting for a third season than for its role this year. But both these complaints are nearly negligible.

Season 2 of The Tick (*****) is phenomenally, relentlessly entertaining, a brightly-coloured, fun riposte to the grimdark of the Netflix Marvel shows and featuring the best lines on television you will hear this year ("I have been trained to lock my problems in a mental glacier under a thousand tons of solid mind-ice"). It is available on Amazon Prime now.
Posted by Adam Whitehead at 21:23

Thanks! I loved season 1 but I almost never watch Amazon Prime, so I probably would have missed it for months.

I totally agree with your review of Season 1 and I'm really excited that season 2 is even better!