Angel Investigations is expanding, fighting the good fight against evil from a new headquarters and recruiting expert vampire fighter Charles Gunn and finding a new informant in the form of Lorne, the Host. But when demonic law firm Wolfram & Hart resurrects Angel's sire and old lover Darla, it sets a chain of events in motion. To defeat their plan, Angel has to alienate his friends and risk his soul. 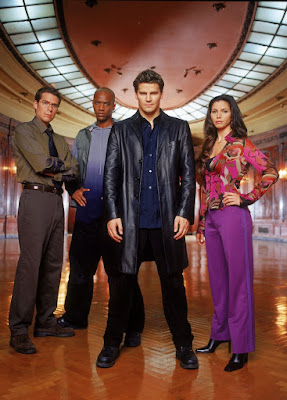 The first season of Angel, a spin-off from Buffy the Vampire Slayer focusing on the broody vampire-with-a-soul, was an entertaining but diffuse collection of episodes which varied widely in quality. However, in the second half of the season the show coalesced with the addition of Wesley as a regular character and became much more dynamic, climaxing with the explosive season finale in which Darla is resurrected.

Season 2 picks up on this thread with Darla playing mind games with Angel and throwing him off his game. Early episodes feel a bit Season 1-ish with a few stand-alone episodes, but these are mostly excellent. Are You Now or Have You Ever Been is a fantastic stand-alone drama which answers the question of what just Angel was doing for the century between regaining his soul and deciding to ally with Buffy and start redeeming himself, and Guise Will Be Guise is an entertaining Wesley solo adventure.

The meat of the season is the relationship between Darla and Angel and its impact on other characters such as Wolfram & Hart lawyers Lindsey ("evil hand!") and Lilah. This creates a complex, messy and compelling ten-episode story arc as Angel's commitment to doing the right thing are tested as he tries to help Darla find redemption, and then (once Darla joins forces with a returning Drusilla, from Buffy) vows to destroy her, alienating his team in the process.

Both Buffy and Angel work best when dealing with moral conundrums and difficult character relationships, and this story allows the writers to explore that to the hilt. Excellent performances - especially from Julie Benz (who was supposed to appear in one episode of Buffy and then die, so was doing pretty well here) - and genuinely surprising plot twists keep the story moving in a gripping fashion.

The season does fall down in a few areas. One of these is that it's never really explained why or how Angel and his team are able to rent out such a massive hotel in LA that is in a fully usable condition. Given their money troubles in Season 1 when they were renting a tiny office, it's unclear how they can afford this building. This is paid more attention to in Season 3, but is a niggling oddity in Season 2. Another is that there's so much going on this season that other storylines from Season 1 are minimised or ignored. Kate Lockley's storyline feels a bit undercooked in particular (Elisabeth Rohm's decision to quit the show to become a regular on Law & Order being very understandable as a result).

The season then ends in a curious manner. Perhaps feeling that the season had gotten a bit too dark and depressing, the writers decided to visit Pylea, the home dimension of Lorne, a karaoke bar-owning friendly demon who helps Angel out over the course of the season. Angel goes a bit Hercules/Xena in the final four episodes of the season, with lots of unconvincing castle sets and exteriors, and the crew helping the people rise up against their evil overlords. It's Angel's most bizarre and out-of-place story and hugely divisive amongst fans. I kind of like the whacky change of pace and the way it helps Angel come back from his dark place, but at four episodes the mini-arc is roughly twice as long as it really should be. The best thing the arc does is introduce Amy Acker as new regular character Fred, whose importance becomes much clearer in subsequent seasons.

Angel's second season (****½) is a significant improvement over the first, with a much more riveting story arc and more interesting character developments. It's a rollercoaster of darkness and grit, ending in an unexpected blaze of camp. It is available now as part of the complete series boxed set (UK, USA).
Posted by Adam Whitehead at 10:36