According to The One Ring, Amazon have decided against filming their Lord of the Rings TV show in New Zealand (where the six Peter Jackson movies were shot) and instead will base their production in Scotland. 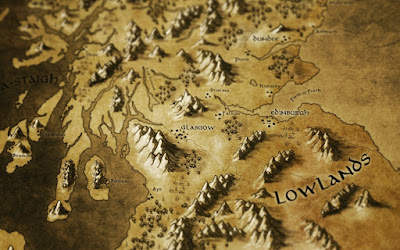 This would be a surprising move. Over the last twenty years, Middle-earth has become almost synonymous with New Zealand, with the epic landscapes of the two islands being used to stand in for Tolkien's vivid geography. With New Line and Warner Brothers involved (at least tangentially) in the new project and with early talk suggesting that the TV series might seek visual continuity with the Jackson movies, it was assumed that shooting would take place in New Zealand.

If The One Ring's report is correct, production will be based at the studio complex located in Leith, just outside Edinburgh, in a new studio complex.

The One Ring is a Tolkien fansite which attracted widespread attention when it gained exclusive access to the filming of Jackson's original trilogy in 1999-2003, regularly breaking stories and featuring exclusive content. They don't seem to have the same access to Amazon, and recently claimed the series would focus on the adventures of young Aragorn. Instead, Amazon have confirmed (twice) that the series will be set in the Second Age of Middle-earth. However, local press have backed up the report by saying that Amazon is leasing the required studio space, which is difficult to keep secret.

- "oh! New Zealand is Middle-earth!" Well, if this project is NOT connected to Peter Jackson's versions, what does it matter?
- We are led to believe that the setting will be Numenor, which is not 'quite' part of "Middle-earth" (if one doesn't consider Beleriand to be Middle-earth)

Scotland should look fine for The Second age for Numenor, and possibly Middle-earth itself.

Also, don't believe anything they post in regards to the Amzaon project, unless it's off of "The Lord of the Rings on Prime" (facebook, twitter, etc.)

They were convinced that it would be about a younger Aragorn, with no references or sources given.

That wouldn't be surprising. I've heard that the only reason they filmed the Hobbit movies in New Zealand was because of Peter Jackson overseeing the project.