Aeons ago, the Asgardians defeated the Dark Elves and banished the source of their power, a malevolent energy known as the Aether. Five thousand years later, at the time of the Convergence, when the Nine Realms align, the Aether has found a way of escaping its exile and summoning the remaining Dark Elves to its service. Thor, Prince of Asgard, once again takes up his hammer to defend the cosmos. 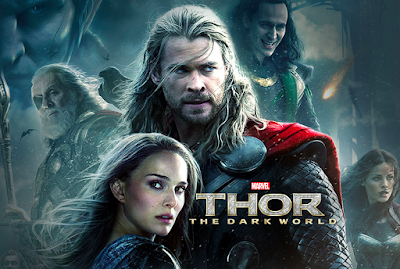 The second film in the Thor trilogy (at least, trilogy so far) is also the weakest, lacking both the operatic grandeur of Kenneth Brannagh's first film and the crazy technicolour pomp of Taika Waititi's third movie. Fan consensus also seems to rate the sophomore entry in the God of Thunder's solo series as one of the poorest Marvel Cinematic Universe films.

The problems with the film are legion. It stars highly accomplished actors Christopher Eccleston and Adewale Akinnuoye-Agbaje as villains Malekith and Algrim, and promptly buries them under so many prosthetics that both their faces and voices are unrecognisable. They might as well have been pure CGI creations or played by extras. It doesn't help that the Dark Elves' motives are non-existent beyond "being bad for the sake of it" and their plan is somewhat vague. Many, if not most, of the Marvel films suffer from the "weak villains syndrome" (a by-product of the best Marvel villains being in th Spider-Man, Fantastic Four and X-Men series, which are, or were, owned by other studios), but this one arguably suffers from it the most.

The film also suffers from some of the usual post-Avengers issues of why at least SHIELD aren't involved in the crisis (the TV series Agents of SHIELD, which has a tie-in with this movie in its first season, raises this question further). Beyond that, there really isn't much for the regular Thor supporting cast (particularly Natalie Portman as Jane, Kat Dennings as Darcy and Stellan Skarsgard as Eric, but also the Warriors Three) to do.

All of that said, the film has some redeeming features. The cast who do have something to do are excellent as always, particularly Chris Hemsworth as a more-serious-than-normal Thor and Tom Hiddelston as Loki, even though this is probably his lowest-key performance. The effects are pretty good and the Lord of the Rings-esque vibe with the Dark Elves is effective. The climactic final battle taking place in London rather than New York or Los Angeles is a nice change of pace. As the joint-shortest MCU (just over an hour and a half in length), the movie doesn't outstay its welcome either. The pacing is also decent, with a nice shift of locales between Earth, Asgard and the titular Dark World, and Heimdall has a decent amount of material, including providing the epic sight of Idris Elba beating up a spaceship single-handedly.

So, the weakest Marvel film? Probably not. Thor: The Dark World (***½) is better than The Incredible Hulk and less weirdly introspective than Iron Man 2 or 3. With very limited tie-ins with the rest of the franchise (the post-credits tie-in with Guardians of the Galaxy and a final bit of set-up for Thor: Ragnarok aside), it may be the most disposable film in the series though, and the most skippable on a re-watch.
Posted by Adam Whitehead at 12:35