The Great Marvel Rewatch: Summing Up

Having rewatched all of the Marvel films in the past couple of months in preparation for Endgame, I thought it'd be useful to list the reviews and do some summing up here. 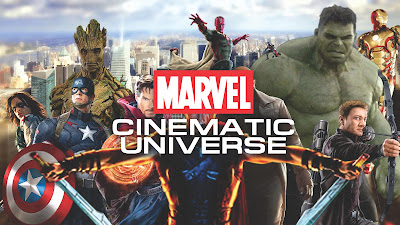 Broadly speaking, I enjoyed revisiting the series. I've never been a massive superhero comics fan, appreciating those films and comics that were really good but certainly not religiously following the medium. My favourite comics and related movies have generally been those that poked fun at or deconstructed the genre, or dealt in areas other than superheroes: Sandman, Watchmen, Scott Pilgrim, Mystery Men and so on.

That said, there was certainly a change around the turn of the millennium when the quality of comic book movies did improve significantly: X-Men 1 and 2, Spider-Man 1 and 2, Batman Begins, Hellboy and a few others.

The Marvel Cinematic Universe follows in this train and has, remarkably, produced no less than twenty-one movies in eleven years that have, between them, never turned out a film that I would consider to be a complete failure, at least nothing to rival the jaw-dropping ineptitude of, say, Man of Steel or X-Men: The Last Stand. The weakest films in the series, the likes of The Incredible Hulk, Iron Man 2 and Thor: The Dark World, still have strongly-directed action scenes, good character beats and some amusing dialogue.

The reverse of this is also true: the MCU has also, to my mind, not yet produced a stand-out, solid-gold, five-star classic. It's come close a few times, but never quite stuck the landing. Perhaps Endgame will be the first film in the series to achieve that.

What was fun, rewatching the series, was seeing how diverse the films can be in terms of tone, veering from the extreme comedy of Ant-Man, its sequel and Thor: Ragnarok to the Shakespearean grandeur of the original Thor to the technicolor space panorama of the Guardians of the Galaxy series, to the more grounded, gritty vibe of The Winter Soldier. In terms of structure, the MCU definitely has a set template which can get occasionally wearying, but in terms of tone and vibe, the films definitely switch things around a lot, which is useful in maintaining interest over such a long period of time.

What was interesting is seeing how this film series has managed to build up continuity links between the films like no other in history. You certainly don't need to have watched all of the films in order to enjoy any of the others (excepting possibly Infinity War and Endgame), but if you do there's a whole range of small subplots and characters beats that keep coming up which is fun to revisit, from minor stuff like Tony's relationship status with Pepper and Happy Hogan's slow career progression to larger elements, like Thanos's rumblings in the deep background and Loki's journey of (at least somewhat) self-realisation. The Marvel Cinematic Universe is a film series which has tapped into the box set, bingeing culture of Netflix, rewarding careful, close viewings of the films in order.

This kind of close rewatching also identifies some key weaknesses in the series. There's a tremendous vagueness to how tough characters are or how much in danger they are in battle scenes. Thor, as far as I can tell, is almost outright indestructible, as is Hulk (at least in Hulk mode). The power levels of the other characters seems more vague, particularly characters like Black Widow who have no supernatural or technological powers at all but can hold their own against enemies who otherwise are real threats to the real hyper-powered characters. This is of course a familiar issue from the comics, where the toughness of the characters will often vary on the needs of the plot.

Another weakness is arguably the most famous one: a serious case of weak villains. The reason the MCU has gone in for Loki and Thanos in such a big way is that their strongest villains are otherwise in the X-Men, Fantastic Four and Spider-Man franchises, the film rights to which until recently were owned by other studios. For the most part the villains in the MCU are forgettable and disposable, with a few honourable exceptions such as Michael B. Jordan's Killmonger (from Black Panther) and Hugo Weaving's Red Skull (from Captain America: The First Avenger). The good news is that the other franchises are now under the Disney banner, so we may see better villains (such as Doctor Doom, Doc Octopus or Galactus) showing up in future films, and indeed we've already seen the first sign of that with Michael Keaton turning in a splendid performance as Vulture (in Spider-Man: Homecoming).

I'll need to see Endgame (tomorrow) and perhaps Spider-Man: Far From Home to get a better sense of where the MCU is going in the future, but for now I'll say that this ridiculously huge list of movies is thoroughly entertaining, although rarely really surprising, and fascinating in its scale and scope.


The Great Marvel Rewatch (in order of release):