The Great Marvel Rewatch: Guardians of the Galaxy

In 1988, young Peter Quill is abducted by aliens and carried off into deep space to be raised as a mercenary. Twenty-six years later, Quill steals a valuable orb coveted by both the renegade Kree warlord Ronan and Quill's own former boss (and abductor) Yondu. The orb rapidly draws the attention of many factions and Quill is reluctantly forced to ally with Gamora (a former ally of Ronan's), Rocket (a genetically-engineered raccoon-like creature), Groot (an ambulatory tree) and Drax (an overly literal, vengeance-fuelled warrior) in order to recover the orb and save the galaxy. 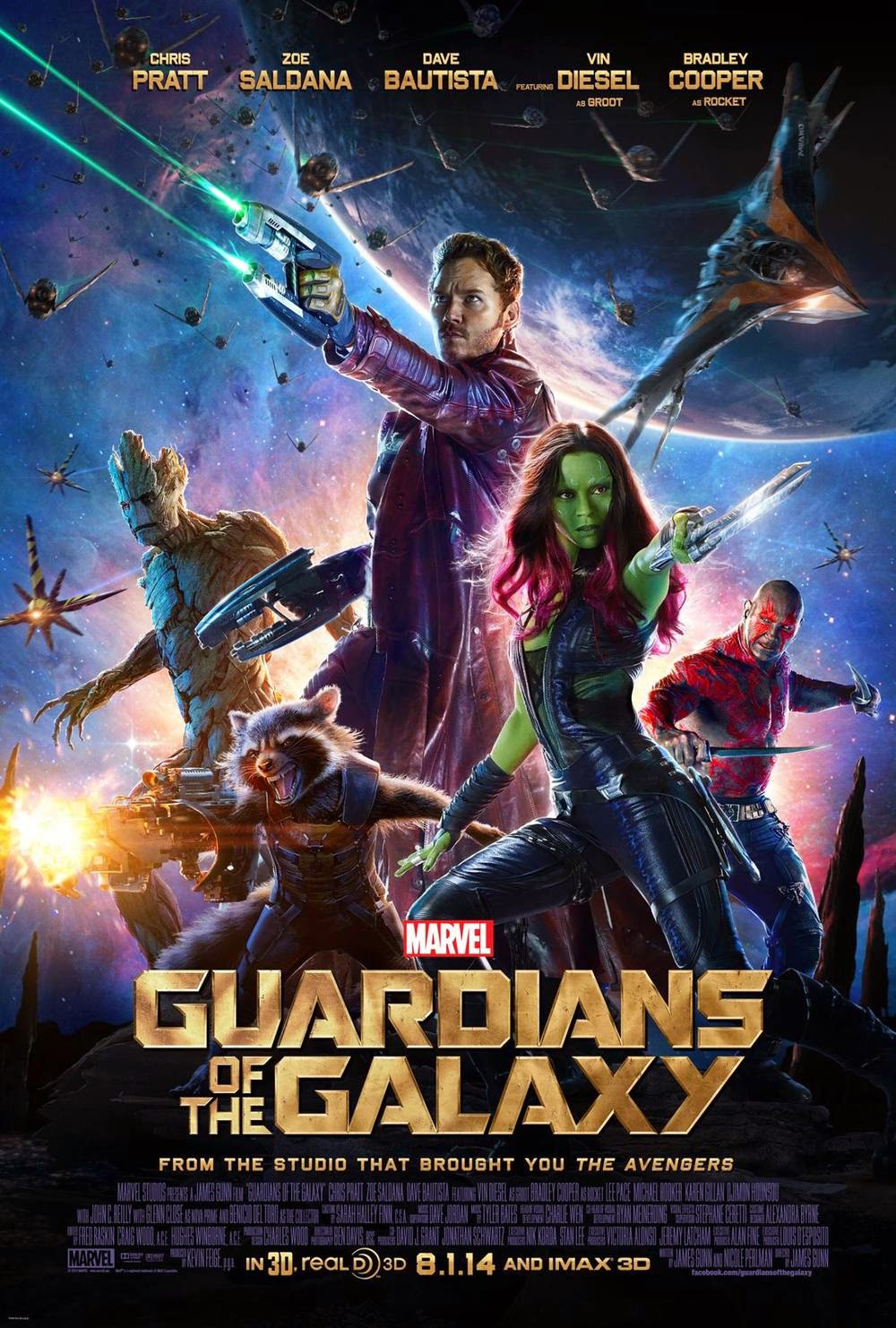 On release, Guardians of the Galaxy was arguably Marvel's biggest gamble in the establishment of its own cinematic universe. Whilst previous movies focused on fairly well-known characters or groups who were at least passingly familiar to a general audience, the Guardians source material was relatively obscure. Guardians was a testbed of how far into its decades of source material Marvel could really reach before losing its audience. Its immense success meant that Marvel could be more confident about going forwards and bringing in more obscure characters from the comics and the audience would stay with them. In that sense, Guardians of the Galaxy is the most important film in the series, paving the way for Doctor Strange, Black Panther and Captain Marvel (not to mention, even further down the line, The Eternals).

Guardians is a fun but flawed movie. It's comfortably superior to any of the Iron Man or Thor flicks, but the (relatively) grounded realism of Captain America: The Winter Soldier worked much better. Guardians's pacing also suffers a little as it struggles to provide backstory and motivation for multiple heroes and villains as well as a cohesive storyline. In fact, the storyline suffers somewhat from fairly risible "the team learning the art of friendship" scenes fitted in amongst discussions of magical maguffins and action beats of varying competence. But the movie overcomes this with zippy pacing and a bright and breezy atmosphere which lifts the whole film and makes it much more rewatchable. The production value is also excellent, especially the 1970s spaceship designs which feel like a melding of Marvel Comics of that era with SF illustrators like Chris Foss and Peter Elson.

What also holds the picture together and makes it work is the offbeat script and direction from James Gunn, the excellent 1980s soundtrack and a formidable cast. Chris Pratt brings the requisite levels of arrogance and overconfidence to Quill, whilst Zoe Saldana is excellent as Gamora. The real revelations come from former wrestler Dave Bautista as Drax (who channels a surprising degree of pathos into his performance) and Karen Gillan as Nebula, who leaves her Doctor Who role of Amy Pond far behind in a vicious and at terms unnerving role. Lee Pace as Ronan is less successful, his camp villainy feeling redundant. A bigger disappointment is that the movie deploys actors and comedians of the calibre of Peter Serafinowicz, John C. Reilly, Glenn Close, Djimon Hounsou and Benicio del Toro and does very little with them. It is good to see Michael Rooker building on his Walking Dead success with a more meaty role as Yondu. His smile of delight when he realises he has been betrayed, thus justifying vengeance later on, is one of the film's more enjoyable, quiet moments.

The film is witty, with some great one-liners and narrative zingers flying around, and the actors are certainly up to the challenge. However, the film does struggle with its CGI. After several movies - most notably The Winter Soldier - where Marvel seemed to be dialling back the use of sensory overload CGI (where stuff happens so fast and blurred that you don't know what's going on), it returns with a vengeance in Guardians of the Galaxy. Some dogfights and battle sequences are almost impossible to follow and intercut so rapidly it makes it hard to appreciate the strong production design. Rewatching does improve this issue, however.

Another area where the film succeeds is in how it is bringing together the different narrative strands established in earlier films. The backstory of the Tesseract (Captain America: The First Avenger, The Avengers) and the Aether (Thor: The Dark World) is explored and we find out more about Thanos, the big bad behind the events of The Avengers. The Collector also returns from Thor: The Dark World. There's a growing sense of a masterplan which will extend through several more movies to come. Gunn even trolls the fans with a post-credit sequence that is nowhere as revelatory and momentous as previous ones, instead going for laughs.

Guardians of the Galaxy (****½) is loud, brash and almost ridiculously goofy, but it's also fun, funny and gains some surprising dramatic weight from its inclusion of larger Marvel Universe elements such as the Infinity Stones (which here get their origins explained). Some good laughs, an excellent cast and some much-needed tying together of the wider Marvel universe storyline overcome some confusing CGI and so-so villains to deliver a solid, undemanding blockbuster.

Note: my original review of the movie from 2014 can be found here.
Posted by Adam Whitehead at 16:09

Another instance of the infamous "Marvel villain problem", as the film managed to make Ronan less interesting than he was in the comics. It also sets up an intriguing confrontation between Ronan and Thanos which, of course, doesn't go anynwhere.
Guardians of the Galaxy is the perfect example of a so-so movie that was transcended by its soundtrack (not really a 1980s soundtrack btw, since the songs are from between 1967 and 1980).