In the aftermath of the fall of SHIELD and the battle against Ultron, which destroyed a large chunk of the nation of Sokovia, trust in superheroes is at an all-time low. The final straw is a battle against Hydra agents in Lagos, in which Scarlet Witch accidentally destroys an office building (whilst trying to prevent a much larger bloodbath). The United Nations sign the Sokovia Accords, placing superheroes under severe restrictions in how they can be deployed and when. Iron Man and Captain America find themselves on different sides of the resulting argument. When Steve Rogers' old comrade (and former brainwashed Hydra agent) Bucky Barnes, the Winter Soldier, is implicated in a fresh atrocity, the Avengers find themselves split and at war among themselves. 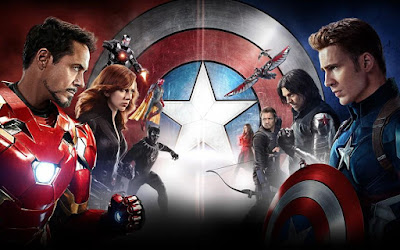 Civil War is marketed as a Captain America movie, following on from The First Avenger and The Winter Soldier, but in reality it's more like The Avengers 2.5, picking up on important plot threads from Age of Ultron and setting the scene for Infinity War. As such it's one of the more continuity-heavy movies in the Marvel Cinematic Universe and one of the (surprising) few where an intimate knowledge of the previous movies in the MCU is a definite asset.

Civil War is very much two movies. On the one hand, it's an all-action, effects-heavy extravaganza with lots of explosions, fights and chases. On the other, it's a surprisingly effective study of the law versus free will, of security versus liberty and of responsibility and consequence. That the same team made The Winter Soldier, possibly the best MCU movie for likewise tackling slightly more serious material than some of the other films, is unsurprising and it's good to see a lot of plot points from that movie picked up and advanced. In particular, the Winter Soldier storyline is arguably more central to Civil War than it was to The Winter Soldier itself.

It was around this point in time that the MCU transformed itself into a well-oiled, purring machine, pumping out reliably entertaining blockbusters three times a year. The Russo Brothers walk a tightrope with this movie, combining crowd-pleasing superhero antics with the opportunity to study the ideas of liberty and responsibility. The problem is that they can't quite explore this theme in as much depth as they want, due to the movie having a lot of other business it needs to get done. This includes introducing both Spider-Man and Black Panther ahead of their respective first solo movies, bringing Ant-Man into the fold of the other characters and resolving the long-standing mystery of the fate of Tony Stark's parents.

Still, if the film can't fully engage with the theme, it at least pays it more than bare lip service, with the disagreement between the two sides being so fundamental that it can't be overcome with a nice chat. In one of the MCU's finest twists, Tony and Steve do eventually come to an understanding, only for a fresh revelation to drop a hand grenade on the situation. In this sense the film doesn't pull its punches, which would have been an easy cop out.

The actors are all on fine form, with Tom Holland particularly impressing as the latest incarnation of Peter Parker, and we even get a good antagonist! Daniel Bruhl is a phenomenally talented actor, and it helps that his character is perhaps less of a standard villain than a catalyst for the already-existing tensions in the Avengers to explode.

Captain America: Civil War (****) is a little bit too overstuffed to be the finest movie in the MCU, but it is up there as one of the stronger entries in the franchise. It's an effective ensemble piece with a twisting, unpredictable storyline, some great set pieces and a surprisingly downbeat ending.
Posted by Adam Whitehead at 16:24