Tales from the Loop: Season 1

1982, Ohio. The town of Mercer sits on top of the Loop, an immense particle accelerator built around a unique stone with unusual properties over time, space, light, magnetism and reality. The Loop's scientific discoveries have led to the creator of magnetic suspension technology and efficient, almost intelligent robots, and the detritus of past experiments litters the landscape. A number of individuals and families have their lives impacted by the Loop and its legacy, which brings them to a closer understanding of the universe, themselves and each other. 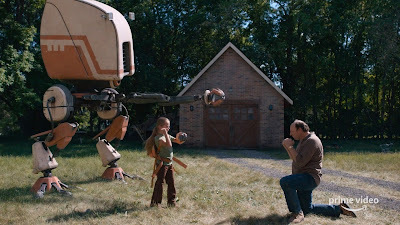 Tales from the Loop is based on a fictional universe created by Swedish writer and artist Simon Stålenhag. This universe was detailed in his art books Tales from the Loop (2014) and Things from the Flood (2016) and was fleshed-out in Free League Publishing's excellent roleplaying game (2017). Amazon Prime's television adaptation is not quite set in this universe, but it does borrow a lot of iconography and imagery from the book to craft a series of almost-standalone stories.

The season takes place mostly in 1982, although there are also flashbacks to the 1950s, when the Loop was first being constructed. If the series has an anchor, it's in the central Willard family consisting of Russ (Jonathan Pryce), the founder of the Loop; his wife Klara (Jane Alexander); son George (Paul Schneider); daughter-in-law Loretta (Rebecca Hall); and grandchildren Jakob (Daniel Zohlgadri) and Cole (Duncan Joiner). We learn gradually that Russ is a genius but has been emotionally absent from his son's life, something he is striving to correct with his close relationship with his younger grandson Cole, a lonely path that his heir apparent, Loretta, may also be following. This lays the groundwork for melodrama, but the show steers away from such cliches, instead choosing to depict events more calmly.

Tales from the Loop's 1980s setting and the source material would both lend themselves to becoming a nostalgia fest; indeed, the original book and RPG both have a much stronger Stranger Things vibe, down to the characters playing Dungeons & Dragons and listening to contemporary bands. Although the Tales from the Loop franchise predates Stranger Things, the TV show clearly does not, so the decision was made to steer the show away from that aesthetic and instead adopt a completely different tone. If Stranger Things is a 1980s action/horror movie on steroids, spread across 24 hours (and counting), Tales from the Loop is more restrained, even arthouse film, more The Quiet Earth than The Goonies.

Tales from the Loop is also much less serialised. There is an on-going story arc of sorts, but sometimes this is not referenced at all in an episode and at other times only barely. Instead the focus of each episode is dramatically different: the first features a little girl (played with beyond-her-years wisdom by Ant-Man's Abby Ryder Fortson) who finds herself in a strange place and has to get home; the second focuses on Jakob Willard and his best friend who play a prank that gets out of hand; the third on a young couple who find the ultimate way of spending time together (played by Nicole Law and Danny Kang); the fourth on Russ Willard; the fifth on a maintenance man (played by Veep's Dan Bakkedahl) who buys a robot to defend his family; the sixth on a security guard (Ato Essandoh) who is searching for a mysterious man; the seventh on a teenage boy (Emjay Anthony) who is trapped on an island with a terrifying presence; and the final episode on young Cole Willard and his despair at change. Events and characters which are front and centre in one episode are on the periphery of another, with the timelines of some episodes intersecting in interesting ways.

Tales from the Loop therefore comes across more like a set of Twilight Zone or Black Mirror episodes, if they were all set in the same town and everyone was kind of accepting of the oddness going on. There are also similarities to Eureka (although a totally different tone) and Lost, which I suspect the island episode might have been a tip of the hat to.

The series has attracted some criticism for being slow, but I found this to be a point in its favour. Each episode has its own storyline and focus, but the story is usually relatively simple and the generous 50-60 minute running time allows each idea to be explored in depth without contrived events to spin things out for another few minutes (a key weakness of many shows in this age of streaming, which seem to assume the audience consists solely of people who will stop watching if there isn't some crazy plot twist, explosion or death every ten minutes). The series has also been criticised for being emotionally remote, a complaint I find utterly baffling. The show is deeply interested in themes like family, love, mortality, morality and the consequences of actions, and it explores each theme with emotional depth and resonance. There are several moments in the series which are capable of reducing the viewer to tears, through the restrained direction, almost uniformly excellent performances (Jonathan Pryce's performance in the fourth episode should win him every award under the sun in particular) and the way the story keeps circling around to touch on ideas raised earlier.

Tales from the Loop's first season (*****) is not for everyone. But the relaxed and quiet pace, the thoughtful storytelling and the measured characters do combine to produce something uniquely compelling, visually beautiful and at times genuinely heartbreaking. The season's conclusion, which may be more timely than ever, is that life may be fleeting and perhaps random, but it is also beautiful and wonderful. It is available to watch now on Amazon Prime worldwide.
Posted by Adam Whitehead at 11:45

I agree on all this. I'm only 3 episodes in, and this is already one of my favourite scifi series (alongside Battlestar Galactica, The Expanse, and Person of Interest). This is completely tonally different, but is lush. It's slower pace, setting, and beautiful score, mark it out as a definite high point in Amazon's output, and in modern anthology scifi series. Really well done to the team involved.