2033. Twenty years have passed since a nuclear apocalypse ended civilisation. A number of survivors have built an underground society based in the Moscow Metro. Stations and their adjoining halls and tunnels now serve as towns, some banded together into factions. Some of these factions are at war with one another, and all are threatened by the hostile creatures (transformed by radiation into mutants) that roam the tunnels and the overground. 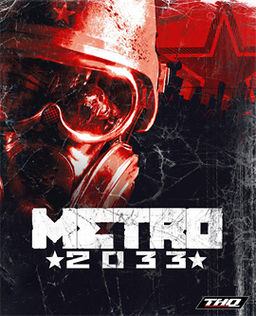 A young man named Artyom volunteers to leave his station and journey to the largest town in the metro, Polis, to seek help against the creatures threatening to destroy his home. However, this is only the start of a long journey as he discovers that there is a potentially greater threat gathering and he may be the only hope of stopping it.

Metro 2033 is a first-person shooter developed by the Ukrainian 4A Studios, an off-shoot of the recently-closed GSC Game World (the creators of the STALKER series of games). It's a post-apocalyptic game employing some elements of survival horror in addition to its more traditional FPS trappings.

The game is played from the POV of Artyom, who narrates the game through observations that appear during loading screens. Otherwise, he is a silent protagonist in-game, more willing to listen and learn from other characters than engage in lengthy conversations. The game style is inspired by the Half-Life series, most notably the idea that it's up to the player how much exposition and backstory they need to hear. When in a peaceful area, such as a town, you can simply press on immediately with the next mission or stick around and listen to conversations to pick up more information about the world and setting. There are a variety of NPC characters who help Artyom out during missions, though usually they are forced to bail out at some point, leaving Artyom to press on alone.

The STALKER influence can be seen in the atmosphere, which is dark, brooding and often oppressive. When on the surface or in gas-filled chambers, Artyom has to wear a gas mask to survive. As the gas mask's filter clogs up, his breath starts to fog over the screen and the sound of his increasingly laboured breathing becomes dominant, until he replaces the filter. Finding filters is thus essential to survival (though only truly an onerous task at the highest difficult levels). This gives a tremendous sense of claustrophobia to some parts of the game. Another issue is that bullets are relatively difficult to find in the game and enemies tend to soak up a lot of damage, making the player have to think much more carefully whether to engage in combat or attempt to sneak past enemies by sticking to the shadows.

The game employs a highly naturalistic style to its interface. Your journal and compass are in-game objects and looking at them means unequipping your weapon, which can be lethal in dangerous areas. The onscreen HUD only appears when needed and tends to vanish whenever you're not using it. There are both stealth and morality mechanics, the former tracking how locatable you are and the former how 'good' or 'bad' your decisions have been, but both are invisible to the player. This adds to the atmosphere, as it leaves you wondering if you have made the right decisions rather than being able to hit a button and bring up a bald numerical figure representing your situation.

The game's art style is dark but impressive, cold in atmosphere and successful in conjuring up an air of constant terror during missions. The towns are warmer and richer, with people huddled over fires discussing how they are surviving and merchants eager to sell you their wares. However, the towns are let down by a lack of variety (they're similar to one another, with little in the way of optional side-quests available) and also a sense that they are not necessary. Whilst ammo is very limited, there's usually enough to be looted in the wild to make depleting your (extremely limited) supply of currency. Amusingly, currency in the game are also bullets, which in moments of desperation you can use as ammo.

Combat is chunky and in many cases satisfying, but the game's difficulty level can make it frustrating. At normal difficulty headshots have no impact and enemies can take a lot of damage to kill. At high difficulty levels enemies can be killed more easily, but at the expense of also making you extremely fragile and also making ammo and money extremely difficult to find. Unfortunately, the game also pulls the old Far Cry trick of removing the satisfying human opponents in favour of unconvincing monsters and mutants later on, but unlike Far Cry never brings back the human enemies later on. The mutants tend to be much less satisfying to fight, which is a problem since they dominate the second half of the game. Particularly annoying are the ape-derived 'librarians', who take ludicrous amounts of ammo to put down. There is a system for 'staring them down', but it feels somewhat arbitrary whether employing this tactic is going to work or not. 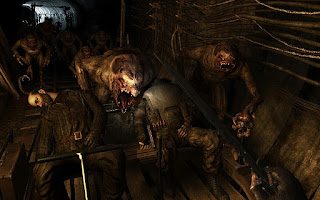 Metro 2033 features regenerating health, but only at a very slow rate, making it almost impossible to heal up mid-battle (you also have pain-killing injections that speeds up the process, but is little help in frantic firefights). There is also no cover system (at least beyond the old-school 'duck and pop up again to shoot' technique). These reductions in modern gaming's most tedious and over-used elements are successful in returning real menace and tension to combat, although they do sometimes go the other way and make battles annoyingly frustrating to win. This isn't helped by a checkpoint system that, whilst never as enragingly awful as Max Payne 3's, is still sometimes unforgiving, forcing you to replay lengthy sections as punishment for tiny mistakes (or random chance).

The game's atmosphere is tremendously effective, its setting interesting (and surprisingly varied) and the characters you meet and ally with tend to be well-motivated individuals. There's a jet-black sense of humour that constantly pervades the game. The game also has a surprising, twist ending (but only if you've done enough 'good' acts to unlock it) that nicely subverts the violent action game you thought you were playing. This has to be balanced against sometimes frustrating spikes in difficulty and a sometimes ridiculous lack of ammo for a first-person shooter.

Metro 2033 (****) is definitely one of the more original and impressive first-person shooters of recent years. If you can get over its brutally unforgiving difficulty, this is definitely a game worth playing. It is available now in the UK (PC, X-Box 360) and USA (PC, X-Box 360).
Posted by Adam Whitehead at 16:55

Email ThisBlogThis!Share to TwitterShare to FacebookShare to Pinterest
Labels: metro 2033

I really enjoyed STALKER, and I think I may have to give this one a try. The reason I've avoided Metro is that I like to have the time and freedom to think through all my next decisions, and this one seems like you've always got to be prepared for a fight to the death, no matter how well you plan

Still, I really like the limitations you describe that force more creative gameplay, and I really liked the consistency of atmosphere in STALKER, which seems at least as good in Metro.

The game is based on russian bestseller book "Metro 33", very mainstream, very unreal but imaginative book. First published in internet (chapter by chapter at http://www.m-e-t-r-o.ru/) by former TV reporter D. Gluhovsky. The autor has demonstrated a good imagination and has created unusual post-apocaliptic setting, but has fail in number of minor and major details, such as mistakes in plan of the underground lines and ignoring all other underground objects.

Nonetheless, the book was published in paperback and become very popular, no surprise since more than one quarter of 16 million citizens (of "big Moscow") are using the underground more or less every day.

It has to be noted, that the ending was changed in the paperback edition to the happy end, while in the internet version the protagonist was shooted by an accident.

I could only play it for half an hour, I just found the controls and movement really clunky.

Might return to it one day but I bought it in a pack of 10 other games cheap on Steam so I'm in no hurry.

Oh and are you playing it with that online graphics boost thing or did you get a new PC?