BEYOND THE WALL now on sale

Beyond the Wall, the Song of Ice and Fire essay anthology I have contributed to, is now on sale in some bookshops (though the official release date is not until next week, I believe). Forbidden Planet in London had several copies on sale yesterday, so I imagine that other copies will be out there in the wild. 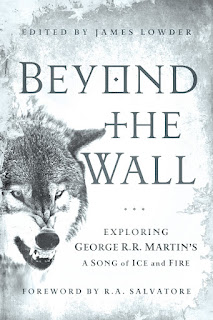 Email ThisBlogThis!Share to TwitterShare to FacebookShare to Pinterest
Labels: a song of ice and fire, beyond the wall, george r.r. martin, gratuitous self-promotion, james lowder

I'm definitely intrigued by this. I've heard that it's a mixed bag, but I love it when people take a little more time than usual to really make an argument, much better than just reading battles in a comment thread.