A Madness of Angels by Kate Griffin

Matthew Swift is an urban sorcerer, someone who can channel the energies of the city to perform great deeds of magic. He is also dead, torn of pieces by a shadowy monster. He is therefore confused to be up and walking around again, with two years passing in the blink of an eye. As Swift struggles to find out what has happened to him, he learns many of his friends are dead, his greatest ally may now be a dangerous enemy and that his only hope of survival may lie with a band of ill-matched wizards, bikers and fortune tellers who hate one another almost as much as their mutual foe. 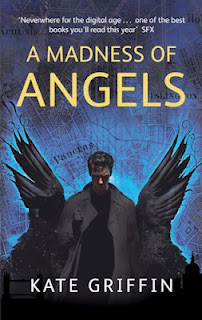 Urban fantasy is a crowded subgenre and stand out from the tosh is an increasingly hard trick to pull off. Fortunately, A Madness of Angels manages to do so through sheer skill and accomplishment. Unlike many series in the genre, which require multiple volumes to gain traction and confidence, this series gets off to a flying start with a book which is brimming with confidence.

Kate Griffin is a pseudonym for Catherine Webb, who had already published numerous YA novels (the first at the age of 16) before tackling this, her first adult work. That experience shows with a bold introduction to the world and characters that most authors would probably steer clear of. The novel opens in media res as Swift is dropped (almost kicking and screaming) back into the life he was snatched away from two years earlier. Strangers are living in what used to be his house and strange forces are chasing him down London streets and trying to murder him. Swift's uses of personal pronouns (he moves between 'I' and 'we' almost randomly) is confused. Bizarrity abounds. We're almost fifty pages in before things start calming down and can start putting the pieces of the puzzle together. It may be harder work than having information dumped in an obvious fashion, but it's also more rewarding (and unlike say Steven Erikson, we at least get the answers to the mysteries in the same novel).

Griffin's prose is a cut above the average for this subgenre, fairly sparkling as it moves between describing feats of magic and the city itself. London is the setting for many urban fantasy novels, but not even in Neil Gaiman's Neverwhere is it evoked as strongly as in this book. The rhythms and beats of the city are given vivid life, not just to merely establish background but also in the magic of the book. In Griffin's world, magic is an evolving, constantly changing force. It's moved into the city and taken its nature as its own, with bag ladies, bike-riding couriers and crazy back-street magic shops having unusual powers and trains and electricity developing their own types of magic.

Swift is our first-person POV character and, normally, the format would restrict any sense of mystery in the character. However, the circumstances of Swift's demise and resurrection are extremely confused, even to Swift himself, and this allows a fair amount of time to pass before we get the full picture of Swift's background and character. He is a well-drawn protagonist, more capable and powerful than many an urban fantasy lead character, but not overpowered or invulnerable (as a running joke about how he can't go more than a few hours between visits to cleaning shops to get blood and/or scorch  marks out of his clothes indicates). He's also undergone a fairly radical transformation of the soul as a result of his experiences, and Griffin explores this in interesting psychological detail. The 'old' Swift appears to be more humourous and sarcastic than the 'current' one, who bursts of black humour aside is more passive. The reasons for this are intriguing. The supporting cast is impressively-depicted as well, with the 'villains' having their own motivations and desires rather than being evil for the sake of it.

A Madness of Angels is highly impressive, especially for the opening novel of a series (though the books are somewhat episodic; this first volume doesn't have a cliffhanger ending or anything of the sort) and only has a few minor issues. The first fifty pages or so sees some clearing of the throat going on as Griffin attempts to find her voice. A laudable attempt to inject a slightly more offbeat writing style into the book ends up with a few instances of purple prose before she finds a more comfortable writing style. There's also probably a bit too much information given away early in the book about the central mysteries, allowing readers to deduce what's going on a little while before the characters.

Aside from these niggles, A Madness of Angels (****½) is an accomplished, highly readable novel and promises great things for later books in the series. The novel is available now in the UK and USA.
Posted by Adam Whitehead at 16:00

“Swift’s uses of tenses (he moves between ‘I’ and ‘we’ almost randomly)” – ahem.

I loved this book.