Principles of Angels by Jaine Fenn

Khesh City floats above the uninhabitable surface of the planet Vellern. It is a city of contrasts, with the rich and powerful living on the luxurious surface and the poor and downtrodden forced to live in the Undertow. The city is a democracy by assassination, where unpopular politicians can be removed by official killers known as Angels. When an Angel is brutally murdered, it falls to her nephew, Taro, to learn the reasons why. 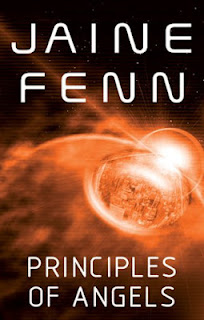 Principles of Angels, the debut novel by Jaine Fenn and the first in her loosely-linked Hidden Empire sequence, is a far-future SF novel centred on two contrasting protagonists: Taro, a male prostitute trying to avenge his murdered aunt, and Elarn, a high-class singer who has been blackmailed into travelling to the city to commit a heinous crime. Taro lives in an underworld of crime and exploitation, but is idealistic, which leads him into becoming an agent for the Minister, the city's enigmatic ruler. Elarn is a more civilised character, out to do the right thing but trapped in a situation not of her own making, one which could have severe repercussions for the entire human race. Other major characters include the Minister himself, the Angel Nual and detective/info-broker Meraint. Fenn does an effective job of distinguishing and motivating these individuals, although the focus is firmly on the two main characters (who alternate POV chapters for much of the novel).

A thousand years before the events of the novel, mankind was ruled by an alien species, the Sidhe. Humanity broke free of their control and apparently destroyed them but, as the title of the series indicates, this may not be the case. Fenn does a good job of filling us in on this backstory by seeding the information into the text naturally, not relying on info-dumps. In doing so, she creates an intriguing universe which the reader definitely wants to see more of.

The plot unfolds at a good pace, helped by the book's relatively concise length (the novel is just over 300 pages long in paperback) which keeps events moving nicely. The writing is reasonable, though given the weird and unusual nature of the setting possibly a little too straightforward. Ultimately, events unfold in interesting enough a manner to make the sequels - Consorts of Heaven, Guardians of Paradise, Bringer of Light and Queen of Nowhere - appealing.

Principles of Angels (***½) is a decent debut novel, with well-drawn characters, a memorable setting and an interesting premise. The book suffers a little from too tight a focus on the two principals, which results in some of the more interesting side-cast being neglected, and also from a writing style that feels like it should have been bolder rather than settling for decent. It is still an entertaining book which effectively sets up a fascinating universe. The novel is available now in the UK and USA.
Posted by Adam Whitehead at 13:36

Are you going to review GOT s2 soon? Looking forward to reading you opinion on it.